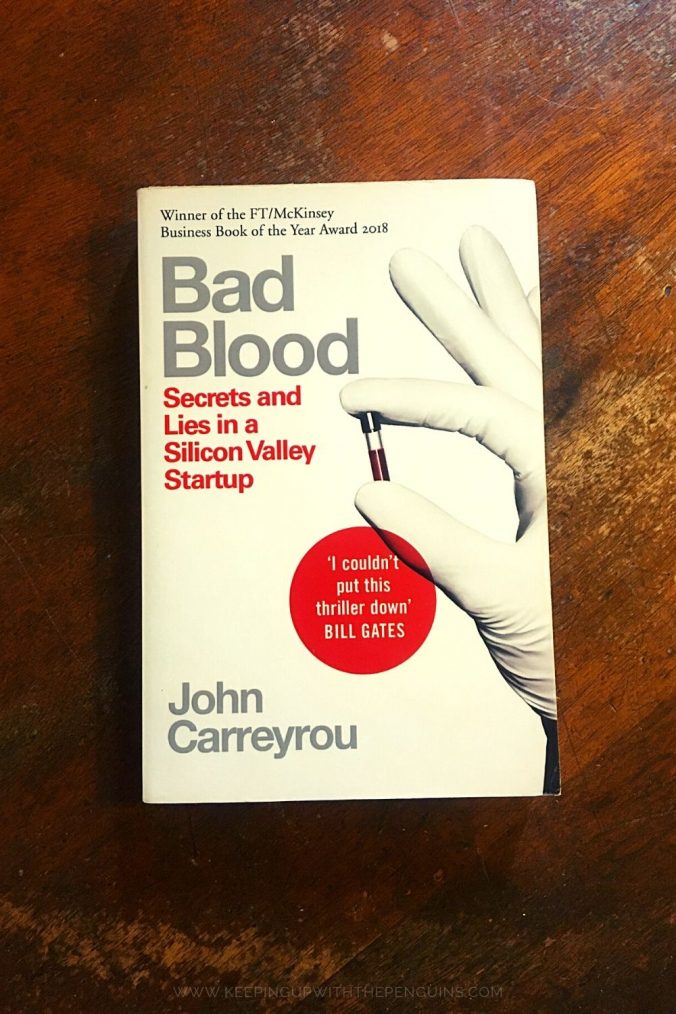 John Carreyrou is the Pulitzer Prize-winning Wall Street Journal reporter who broke the story behind Theranos, the Silicon Valley biotech startup he revealed to be a multi-billion dollar fraud. The story of Theranos, and its charismatic founder Elizabeth Holmes, has reached mythic proportions in popular culture. Bad Blood is the riveting true story told in full, straight from the source, so if you’ve only heard it in snippets and memes, this is the book for you.

Bad Blood is a true crime book about corporate fraud – an particularly rich untapped vein in that genre, if you ask me. This story has got it all: the gold-rush mentality of Silicon Valley, a brilliant idea, secrets and lies, a house of cards, a cat-and-mouse game with reporters… it all unfolds like a high-octane thriller, but better, for being real.

Holmes started Theranos as a 19-year-old college drop-out. She had incredible vision and admirable goals – making health care accessible and affordable, effecting a shift in the power dynamic between doctors and patients. You know, information is power, and all of that. She imagined a device in people’s homes that would allow them to diagnose dozens – no hundreds – no thousands of diseases with a single finger prick, a far cry from long lines at the pathologist to have vials of blood drawn at a time.

The amounts of money that she was able to attract with this idea are astronomical. Most of the people involved aren’t household names (with the exception of Rupert Murdoch), but the brands that got on board – Walgreens, Safeway – sure are.

Unfortunately for them all, Holmes’s ambition was coupled with complete delusion about her capacity to achieve and deliver on what she promised. She had all the hallmarks of a cult leader: a charismatic recruiter with a peculiar talent for pitting people against each other while keeping them on her side.

For over a decade, as Carreyrou depicts in Bad Blood, Holmes systematically drove away dozens of people who could have actually helped her, tarring them as nay-sayers and small-minded critics. The extreme lengths that Holmes and her lawyers and devotees went to prevent their fraud being made public brings to mind Harvey Weinstein and the story that unfolded in She Said (Holmes and Weinstein even used the same lawyer).

Holmes channeled [the] fake-it-until-you-make-it culture, and she went to extreme lengths to hide the fakery.

Carreyrou himself doesn’t appear in the story until Chapter 19. He conducted hundreds of interviews investigating the story of Theranos and preparing it for the public – first for the Wall Street Journal, and then for Bad Blood. He managed to track down no fewer than sixty former Theranos employees, convincing them to set aside their fears of retaliation and legal ramifications. Holmes herself declined to participate (hard to imagine why…).

It all allowed him to paint a completely convincing picture of what life inside Holmes’s web was like, but it also led to him becoming personally invested in the story and a target of Holmes’s wrath. He does come off as slightly defensive towards the very end of Bad Blood (did we really need to know about the ‘fuck you, Carreyrou’ chant the Theranos employees did at a gathering?), but I suppose it’s understandable, given what they put him through.

Bill Gates said that “Bad Blood tackles some serious ethical questions, but it is ultimately a thriller with a tragic ending. It’s a fun read full of bizarre details that will make you gasp out loud,”. It also serves as a testament to the power and importance of unbiased investigative journalism. Bad Blood had my jaw dropping and my tongue wagging for days, and I highly recommend it to anyone who wants a true crime read without blood.