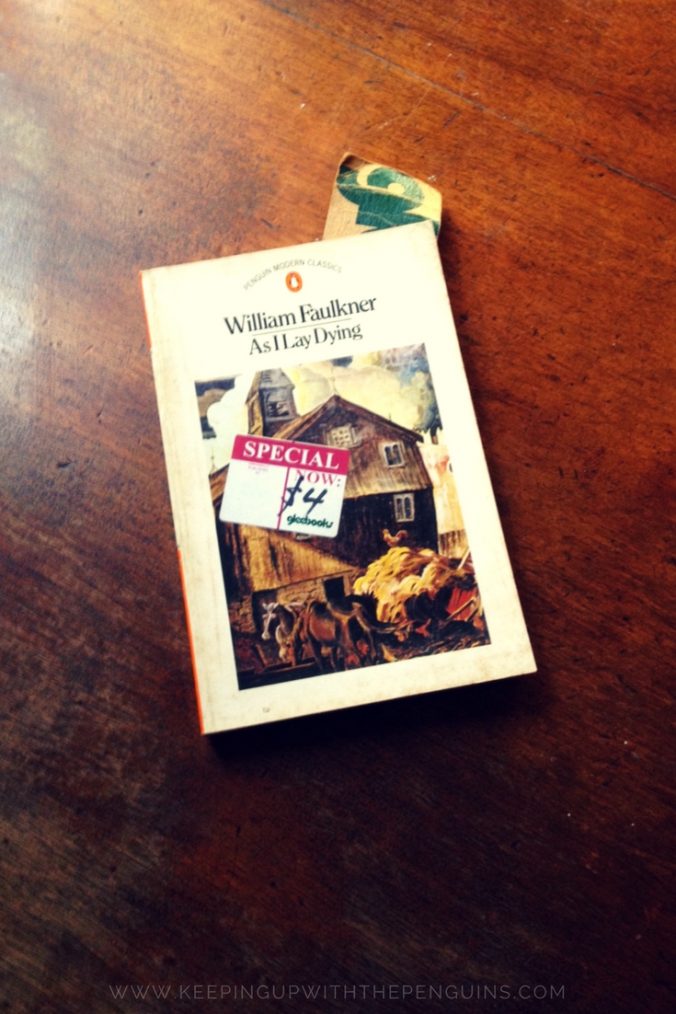 As I Lay Dying – William Faulkner

Inspired by Cheryl Strayed in Wild, I went ahead and picked up As I Lay Dying by William Faulkner for my next undertaking from my should-read list. I’d scored a copy for the princely sum of $4 – that secondhand bookstore bargain bin strikes again!

William Faulkner won the Nobel Prize for Literature in 1949, and As I Lay Dying is widely regarded as one of the greatest American novels of all time, so plenty of people far smarter than me seem to think that it’s very good. Apparently, Faulkner wrote it in six weeks while working night shifts at the local power-station, and didn’t change a word of it after the first draft was completed (what a show-off).

Having read it now, I can tell you at the outset that a genealogical table (a la Wuthering Heights) sure would have come in handy. Unfortunately, this edition didn’t include one, so I took the liberty of creating one myself…

See, As I Lay Dying is narrated by no fewer than fifteen different characters over the course of 59 chapters, so that’s a bit much. Luckily, the name of each character was used as the title of each chapter in this edition, so that was very helpful. Faulkner virgins should definitely use the guide above to keep track, because I’m going to break the story down as best I can and it’s fucking convoluted (scroll up to review the chart as often as you need).

So, we kick off with a woman (Addie) laying in bed, dying. Seems about right. And her eldest son (Cash) is building her coffin right outside her window, where she can hear. And the whole family is arguing about whether that’s cool or not. And they’re trying to figure out whether they can get $3 together in time to bury her. Then she dies, and everyone’s upset. The youngest son, Vardaman, catches a fish. You following so far?

The story goes on to depict the death and burial of Addie, as described by various members of her family and other hangers-on. They carry her coffin from their bumfuck-nowhere town to some other bumfuck-nowhere town, telling themselves and each other over and over again that it’s “what she would have wanted”.

They almost lose her coffin a couple of times, because the rains come and the rivers get fucking hectic in that part of the world. Cash breaks his leg, Darl burns down a barn, Jewel wants to bail on the lot of them because they’re fucking mental, Dewey Dell tries to buy an abortion at a corner store, and Vardaman just wonders what the hell is going on, all the while firmly believing that the fish they caught is actually his dead mother. Papa Anse ends up taking Dewey Dell’s abortion money to buy new teeth, and marrying the woman from whom he borrowed a shovel to bury his first wife.

It’s all a bit weird, sure, but that didn’t turn me off. I was actually really touched by the description of the family electing to lay Addie top-to-bottom in her coffin, so that the wedding dress they buried her in could flare out and not get crushed. I mean, that’s really sweet (if a little morbid), right? Another highlight was the chapter narrated (posthumously) by Addie herself; it was captivating and beautiful. For me, it puts to rest any argument as to whether it is possible to write from the perspective of a gender or creed that is not your own. Faulkner deftly and skilfully captures the lived experience of a poor woman trapped in a shitty marriage and a small town. I doubt I’ll read As I Lay Dying in full again, but I’ll refer back to Chapter 40 many times.

“In the afternoon when school was out and the last one had left with his little dirty snuffling nose, instead of going home I would go down the hill to the spring where I could be quiet and hate them.”

Addie (As I Lay Dying)

Prepare yourself, though: the further in you get, the more Faulkner’s writing sounds like drunk texting. That’s my tl;dr summary of As I Lay Dying: Faulkner drunk texts the death and burial of a Southern woman with a crazy family. I would recommend As I Lay Dying to people who are already familiar with Faulkner, and/or like their stories short and weird.

My favourite Amazon reviews of As I Lay Dying:

I’m very guilty of having pretended to have already read this book when I first met my husband; we were on a date, he mentioned it, and I wanted him to think I was cool! If you find yourself in the same situation, check out my guide: what to say on a Tinder date about books you’ve never read.

Do You Read The Introduction First?