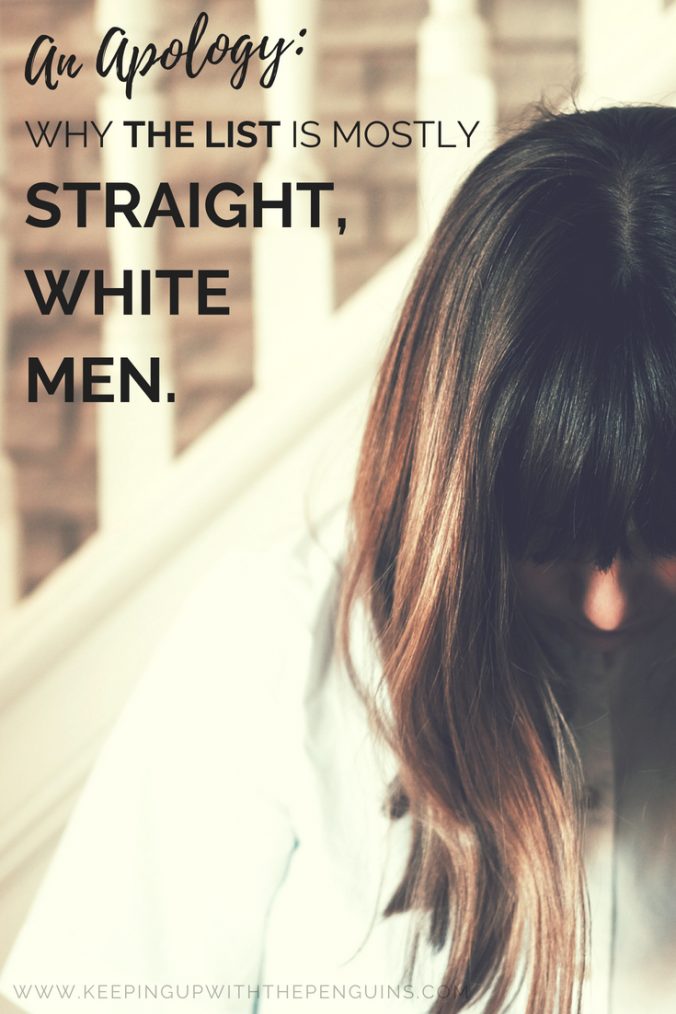 An Apology: Why The List Is Mostly Straight, White Men

I did a very-bad, no-good thing when I first imagined the Keeping Up With The Penguins project. Today, I throw myself at your mercy, and ask for your forgiveness.

Eagle-eyed Keeping Up With The Penguins readers may have noticed something a little funky about my reading list (and, if you haven’t, I’m hoping the title of this post will tip you off). The authorship of the list is 68% male, 82% straight (give or take the 14% that are unconfirmed), and an astounding 92% white.

In my experience, most cock-ups happen when otherwise well-meaning people – feminists, activists, and “SJWs” among them – take their eye off the ball. Losing track of yourself for just a second can lead to something that is Horribly Unwoke(TM). That’s what happened to me here.

One moment, I was having a casual chat with my husband about all the books I’d never read, and absent-mindedly pulling together a list… Next thing I know, I’ve launched a blog where I’m publicly reading and discussing a list of works that doesn’t at all represent the diversity that I believe in.

Where did I go wrong?

I’ll own my fuck-up: I stopped thinking critically about my sources. As I’ve mentioned elsewhere, my reading list in its current form is a jumbled-up combo plate of the Dymocks 101, the Guardian’s 100 Best Books Written in English, and a handful of recommendations from friends and family. Each of those sources is subject to their own biases, and I didn’t stop to consider that for even a second. D’oh!

On the whole, the community is doing a good job (if a slow one) at reinterpreting the literary canon. Work by queer people, people of colour, women and authors outside the gender binary – it’s all starting to get a look-in. I had an opportunity to ride that tide with this project, and I missed it.

So, what am I going to do about it?

I honestly considered changing my Keeping Up With The Penguins reading list, paring it back and building it up again so that it more accurately represented the diversity of authorship to which I aspire.

But the more I thought about it, the more that seemed to defeat the purpose of this project altogether. The whole point of Keeping Up With The Penguins is to catch up on all those classics that everyone already talks about, to read a steady stream of books that I wouldn’t otherwise consider. I get an opportunity to mull over the relative merits of what we accept as “standard”, and look at the diversity issues within and around the texts that everyone accepts as read.

Plus, in the end, my reading life won’t end with this list. I think the best thing that I can do is make absolutely certain that my subsequent reading choices prioritise diversity, and that I think critically about what books I select and why.

So, there you have it. Put me in the bin, if you must. But don’t think that I’ll be making this mistake again! Live and learn 😉 Let me know what you think in the comments below (or jump onto KUWTP on Facebook!).