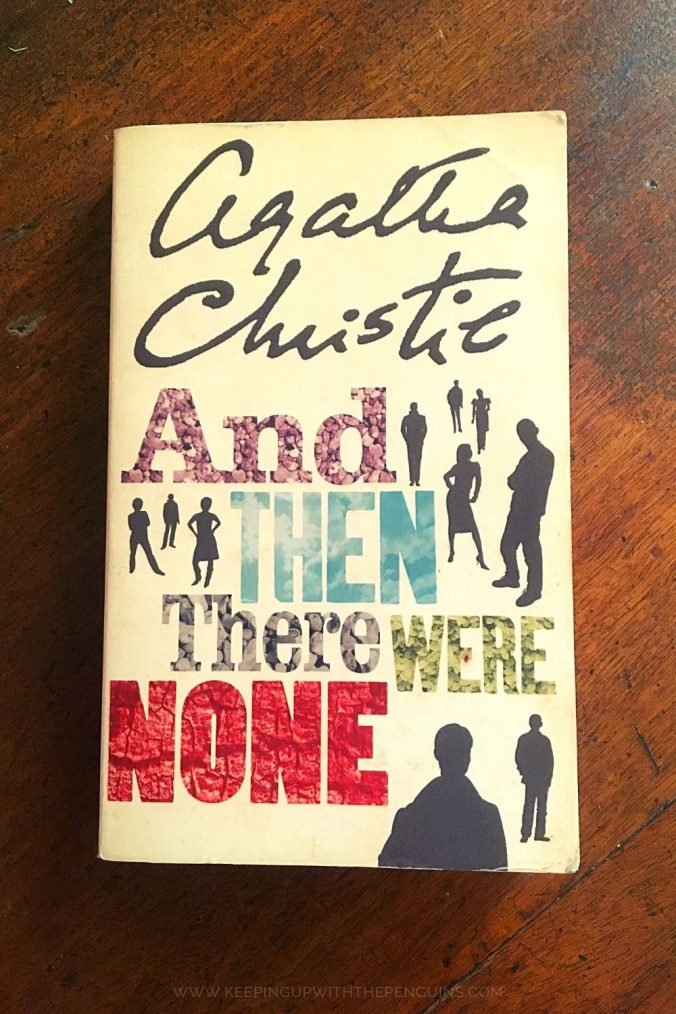 And Then There Were None – Agatha Christie

This year (aside from everything else) marks the 100th anniversary of the publication of Agatha Christie’s first mystery novel. She went on to become the Queen of Crime, selling over a billion books in English, and another billion in translation. The lady’s got the chops, if popular opinion is anything to go by. So, for my first foray into her body of work, I chose the best-of-the-best: And Then There Were None, which, according to the blurb on this edition, is the world’s “best-selling mystery” with over 100 million copies sold.

(Christie herself also declared it to be the “most difficult” book she ever wrote, by the way.)

Ten strangers are lured to an isolated island mansion. All were brought there under similar false pretenses: an invitation from an old friend, a job offer from an agency, and so forth. On the first evening, while they’re all finishing up dinner, a recorded voice piped into the room by gramophone accuses them all of having a guilty secret. Specifically, each one of them has committed (or contributed to) a murder. By the time they’ve stopped reeling from the announcement, one of the guests is dead.

Obviously, they all decide to get while the getting’s good – who wants to hang around on an island with a corpse, especially when all the living souls there with you know your darkest secret? The thing is, a terrible storm blows up, preventing any boats from traveling to or from the mainland. There’s another death, then another, then another… none of them accidental. Who is the killer? Will anyone survive?

As far as mystery novels go, And Then There Were None demonstrably has a (pardon the pun) killer premise. It’s a locked-room mystery, with a ticking clock.

Alas, I’m going to have to pull us away from the intrigue for a second to address the very obvious elephant in the room. Agatha Christie was… well, a racist, homophobic, shit-storm of a person. If she’d been alive today and had a Twitter account, she would have been publicly flayed for her outrageously prejudiced depictions of her characters that weren’t white and straight. And Then There Were None was originally published as Ten Little N*****s (no, the original title was not censored) in the U.K., and as Ten Little Indians in the U.S. Obviously, those titles are problematic in the extreme.

Both versions were drawn from alternate versions of a nursery rhyme, which (in turn) forms a central part of the novel’s premise (more on that in a minute). Even back at the time of publication, in 1939, the n-word was a bit too contentious for an American audience (thus, the name change). Various editions continued to use the racial slurs, on both sides of the pond, until 1985, when decency finally won out and all references to n*****s and Indians were replaced by “soldiers”. Thus, the nursery rhyme in question is “Ten Soldier Boys”, and the island on which the story takes place is “Soldier Island”.

Still, traces of Christie’s personal prejudices remain. In the first chapter, there’s some truly alarming anti-Semitic remarks. She uses the word “queer” at least fifty times – whether as a slur or a contextually appropriate equivalent of “strange”, it’s difficult to tell, but it’s still discomfiting. Really, it’s a wonder that she even counted the butler and his wife as “people”. As such, I feel obliged to warn all readers up front: if you’re particularly sensitive to these kinds of insensitivity, And Then There Were None (and, in fact, Christie’s entire back-catalogue) is not for you.

But, assuming you can stomach it, let’s get back to the story: in each guest’s room is a framed copy of the Ten Soldier Boys poem. The deaths of the guests follow the pattern of the rhyme: the first chokes to death at dinner, the second “overslept” (i.e., never woke up), and so on. Luckily, this edition includes the poem as an epigraph, because I couldn’t help flicking back to it after each murder to see how it related to the original poem and to try and guess how the next murder might take place. Sure, the whole thing is a bit far-fetched… but it was fun!

And Then There Were None was pretty much what I’d expected, given its age and reputation. It was quaint, and there were some unintentionally hilarious moments (such as the woman who marvels at “how big the sea was!”, and the frequency with which brandy is offered as a cure for fainting), but it also managed to be compelling and clever.

“When you read what happens after that you will not believe it, but you will keep on reading, and as one incredible event is followed by another even more incredible you will still keep on reading. The whole thing is utterly impossible and utterly fascinating. It is the most baffling mystery that Agatha Christie has ever written, and if any other writer has ever surpassed it for sheer puzzlement the name escapes our memory. We are referrinng, of course, to mysteries that have logical explanations, as this one has. It is a tall story, to be sure, but it could have happened.”

Everything is wrapped up very neatly in the end (no ambiguous fade-to-black endings for the Queen of Crime, no siree!). The epilogue appears in two parts: first, a confused conversation between two Scotland Yard officers attempting to reconstruct the events that took place on Soldier Island; then, a trawler captain finds a message in a bottle, a written confession from the murderer. Normally, I’d be happy to go ahead and spoil the ending (the story is over eighty years old, after all), but seeing as it managed to keep me guessing right up until then, game respects game and all that.

And Then There Were None is the most-adapted Agatha Christie book. In fact, a few of the adaptations she even wrote and produced herself. She famously changed the ending for theater audiences when she wrote the 1943 stage-play, the original version being a bit “too bleak”. Many subsequent adaptations have also used that alternative ending. I like the original, though, and I can’t imagine that a more up-beat version could be any better. All told, And Then There Were None is an (almost) thoroughly enjoyable classic crime novel, a quick and satisfying read (if you can set aside the problematic elements).

My favourite Amazon reviews of And Then There Were None:

What Makes For A Good Plot Twist?