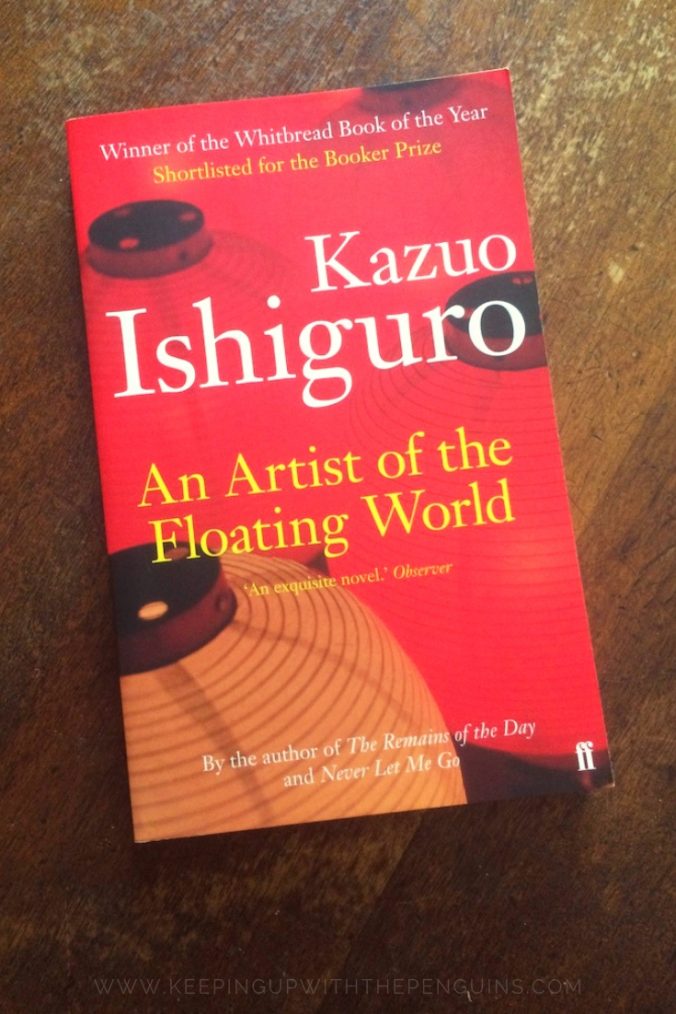 An Artist Of The Floating World – Kazuo Ishiguro

Kazuo Ishiguro: maybe you’ve heard of him? He got the Nobel Prize for literature in 2017, and is widely considered one of the most celebrated contemporary fiction writers in the world today. Seriously, this guy’s resume is unbelievable: four Booker nominations (and a win), the Time Novel Of The Year in 2005, the Costa Book Of The Year (back when they were still called the Whitbreads), he was knighted even! And yet, this book is far from his most popular. I’d go so far as to say it’s the least-known of his entire back catalogue. An Artist Of The Floating World was pretty near impossible to find in second-hand book stores, but I’m glad I persisted.

An Artist Of The Floating World was first published in 1986. I’ll confess to some trepidation when I picked it up. First off, I assumed (wrongly, as it turned out) that it was another fictionalised account of WWII; in fact, it’s set in Japan after the surrender. Secondly, I assumed – with the Nobel Prize and everything else in Ishiguro’s trophy cabinet – that it would be a Very Smart(TM) book (i.e., dense to the point of unreadable). And, once again, not so! It was very accessible, right from the beginning, even without having an intimate knowledge of the time period and setting.

Its title is taken from a literal translation of the Japanese word Ukiyo-e, referring to the art of printmaking, “an artist living in a changing world”. This refers to the narrator, Masuji Ono, an ageing painter who has lived through the seismic shifts of a world war (and we all know how that worked out in his neck of the woods). The novel depicts Ono’s struggle to accept responsibility for his past. An Artist Of The Floating World reminded me of Mrs Dalloway, actually. The action itself only takes place on four separate days (over the course of a year and a bit, 1948-50), but with all of his digressions and trains of thought, the reader gets a much richer story over a much longer time period. That said, it’s a lot more readable than Mrs D, and as such I got a lot more out of it.


Alright, I’ll stop being so vague, here’s the story: prior to WWII, Ono was a promising artist, but he shit all over the traditions of his master and took instead to creating propagandistic art for the far-right political groups that were gathering strength in Japan at the time. He even became a police informer, playing a very active role in an ideological witch-hunt that saw other artists (his contemporaries and colleagues) sought out and shut down by the authorities.

Then, of course, after WWII his actions weren’t looked upon so kindly by the broader Japanese community. With the collapse of Imperial Japan, Ono is widely discredited, considered a traitor who contributed to the country being “led astray”, and the people he once denounced are restored. All of this plays out for the reader through Ono’s memories. At times, it looks like he’s coming to acknowledge his errors in judgement, the role he played in the war effort, and the rightful condemnation he’s now receiving. He never says it outright (that would be too easy, and no fun!), but it’s the vibe he gives off, y’know?

Alas, by the time he gets around to describing a fourth and final day, in June 1950, he’s done a full one-eighty. He goes right back to Cognitive Dissonance Mountain, denying his wrongdoing and refusing point-blank to change his point of view.


Ishiguro really cleverly manipulates the first-person point of view, using the unreliable narrator trope to great effect. He never tells us directly that Ono is high on his own fumes, but he still makes it abundantly clear to the reader that Ono is fallible, in a way that makes you cautious but not entirely disbelieving. Take, for instance, the way that Ono quotes others’ admiration and indebtedness to him, and yet a scene of horrible police brutality as a result of his dibber-dobbering (for which he explicitly takes no responsibility, natch, despite the victim’s later rejection of his apologetic overtures) tells a completely different story. Ono describes the technique and craft of his paintings, mentioning their content only in passing, even though the propaganda is crucial to the reader’s understanding of his story. Ishiguro managed to cram in a bunch of other great stuff as well, even through Ono’s foggy lens; there was a really interesting exploration of the changing roles of women, and the changing nature of marriage, in post-war Japan that I quite enjoyed. It was brilliantly done. He probably deserved that Nobel, eh?

On the whole, An Artist Of The Floating World was a very pleasant surprise. I think it would be a worthwhile addition to my list of award-winning books that you should read. If you liked Memoirs Of A Geisha, you need to put this one on your to-be-read list (in fact, just to be safe, put it right at the top – trust me!).

My favourite Amazon reviews of An Artist Of The Floating World:

7 Books That Will Take You By Surprise