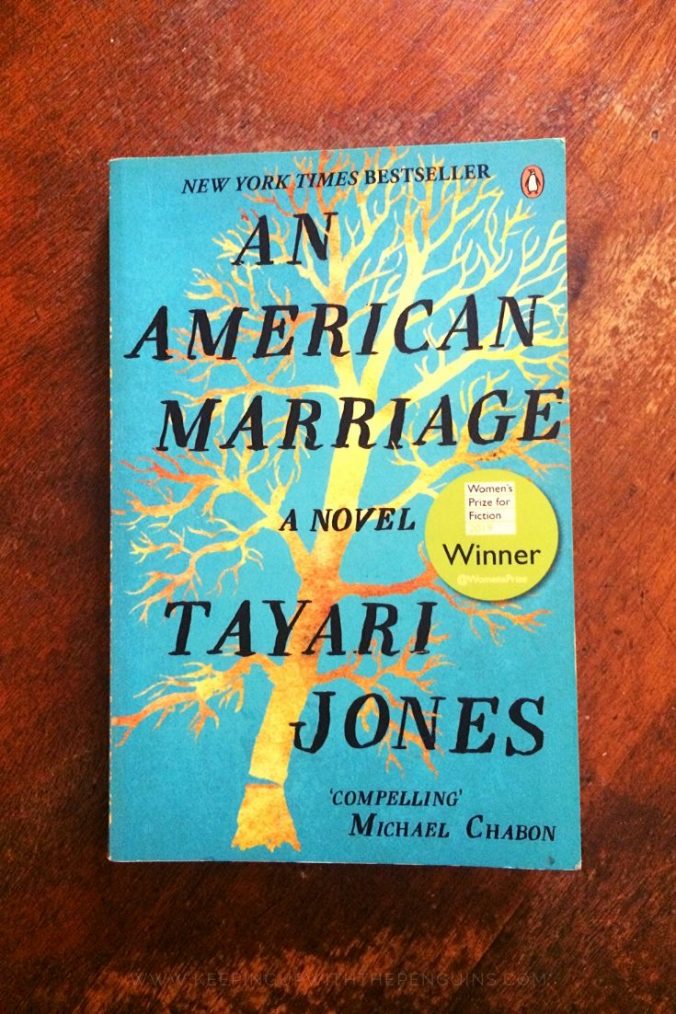 Here’s another book that’s been on my to-read list forever: An American Marriage by Tayari Jones. I had a copy on my shelves for over a year, but I kept saving it for “the right moment”. Well, given everything that’s happened in the U.S. over the past couple of months, that moment is now. This is the book that Oprah says has “redefined the traditional American love story”.

An American Marriage is Tayari Jones’s fourth novel, but it’s truly her “break-out” book – the one that brought her international attention and acclaim. I love the story of how the idea came to her, which she relates in a letter to the reader in the front of my edition:

An American Marriage is a love story I found in the mall, of all places. Sitting in the food court, I overheard a young couple arguing in hushed tones. She said, ‘Roy, you know you wouldn’t have waited on me for seven years.’ He looked puzzled and then replied, ‘This wouldn’t have happened to you in the first place.’

From that spark of inspiration came this story of Roy and Celestial, a middle-class African American couple living in Atlanta. They are educated, employed, upwardly mobile – pretty much the exact opposite of the stereotype of young black lovers fighting poverty or substance addiction on the mean streets. Still, even though they’re newlyweds and they’ve “done everything right”, their lives are torn apart when Roy is accused of sexually assaulting a woman.

Now, An American Marriage is not a did-he-or-didn’t-he story. Roy’s innocence is never in doubt. Fortunately, Jones also sidesteps describing or interrogating the nature of the assault that did actually take place (so there’s no fuel to fire any false-allegation readings) – she presents this as a case of mistaken identity, with the weight of hundreds of years of systemic racism behind it. A black man was in the wrong place at the wrong time, and he paid the price: convicted and sentenced to twelve years in prison.


Of course, given the premise, this book is about the incarceration of black men in America (59% of all incarcerated people in the U.S. are Black or Hispanic, and Black men are incarcerated at five times the rate of white men; source) but that’s not all it’s about. Jones has taken the maxim of writing about “people and their problems” (as opposed to simply problems personified) seriously. Roy and Celestial, and the characters on the periphery of their relationship, are complex, fleshed-out, “real”. As much as this novel addresses very timely social issues, it also looks at what it takes to make or break a marriage, and the sliding doors moments that affect all our lives. I think what it shows best of all (to borrow and mix a couple of metaphors, forgive me) is that there is no one straw that breaks a camel’s back, and no marriage exists in a vacuum.

Some sections are epistolary, told in letters sent back and forth between Roy and Celestial. They’re essentially existing on different timelines; “real life” has stopped for Roy, and he has little to do but think about his marriage, while everything continues for Celestial on the outside. Jones is really clever in how much she “shows” the reader about these characters, and how they change, through their letters. For the first few years, they’re writing frequently and emphatically, but there’s a noticeable shift as Celestial’s life begins to progress and Roy feels frustrated at being “left behind”. It’s a unique window into the ebbs and flows of a relationship where each character takes the time to articulate their thoughts on paper, directly to the other, with nothing said in haste and no performance for onlookers.

Then, there are other sections that are internal narratives, told from the perspectives of Roy, Celestial, and Andre (a vested third party in their marriage). This is another deft stroke from Jones (gosh, she’s clever), as it lets each character speak for themselves and gives them each an opportunity to win us over (or piss us off). There really is no “hero” in this story, no one character that you’re really rooting for at the expense of the others. You’ll be lured into loving and resenting all of these characters simultaneously. Some might find that annoying, but I actually really appreciated the shades of grey and being able to see things from all sides. It’s the most realistic kind of love story. And, besides, at the heart of it all, there’s one common enemy, for the characters and for us: the racism at the core of the U.S. “justice” system. That’s not a focus of the novel, per se, but it’s the backdrop against which the love story plays out.


Anyway, back to the plot: three years into Roy’s sentence, Celestial tells him she no longer wants to be his wife, which pisses him off (obviously). He refuses to see her or accept her letters for the following two years. Then, his case is overturned on appeal, and he is released. He optimistically reaches out to Celestial, hoping that their marriage could be rekindled (as she never formally divorced him), naively forgetting that he’s coming “home” to a marriage that existed mostly in his mind.

Normally, this is where I’d just go ahead and dissect the ending for you too, but I reckon this’ll be one of my very few spoiler-free reviews (okay, fine, Roy’s early release is probably technically a spoiler if you’re going to get all persnickety about it, but that only comes about half-way through the book, so there’s still a whole lotta twists and turns that I’m not ruining for you, so suck it up). What I will say is that Roy and Celestial’s story, the way it unfolds, is heartbreaking and infuriating – all the more for the fact that it’s such a common and devastating reality for so many American families.

I worry about pushing that angle too hard, though, lest An American Marriage get pigeonholed in your mind as an “issue novel”. It’s truly not. It’s based on realistic “issues”, yes, but it’s ultimately about loyalty, how much we owe and to whom. It’s about marriage, and what we can reasonably expect from our spouses and ourselves. And, best of all, it’s so readable (stay-up-all-night-to-finish-it readable), and so emotive (make-sure-you’ve-got-tissues-handy emotive). If you’ve been putting off reading this one because of all the hype, stop doing that and get on it right now – An American Marriage totally lives up.


My favourite Amazon reviews of An American Marriage:

What’s The Difference Between Literary Fiction And Popular Fiction?