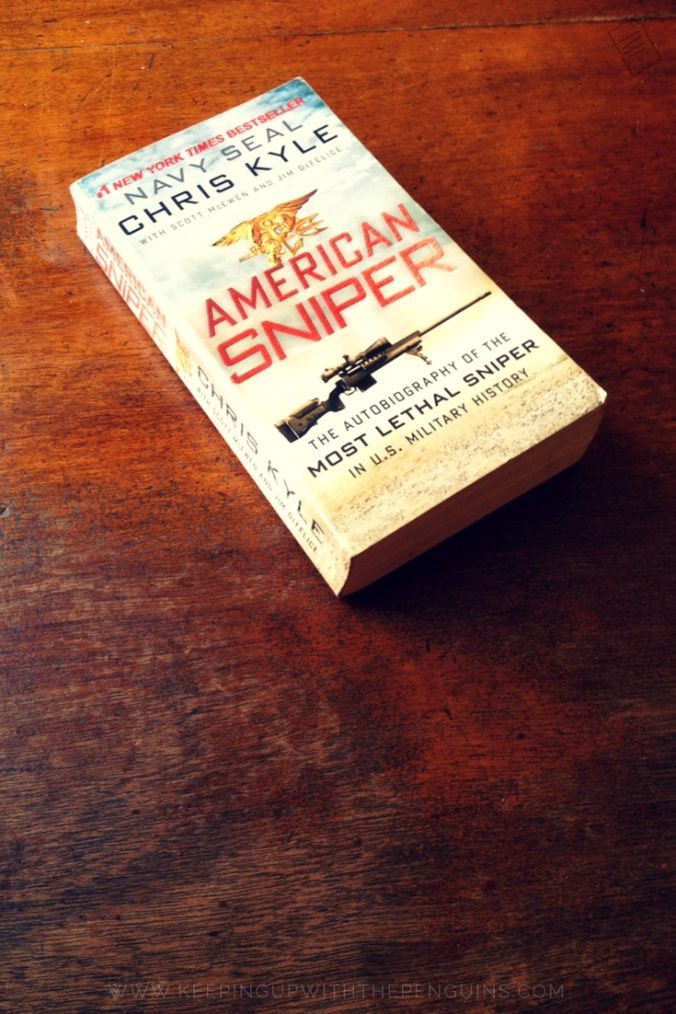 The best part about the Keeping Up With The Penguins project is the opportunity for rapid gear-shifts. In this case, I went from classic children’s fantasy to a 21st century assassin’s memoir, in the form of Chris Kyle’s American Sniper.

This copy was proudly borrowed from the library of my mate Drew, which I guess makes him a Keeping Up With The Penguins sponsor of sorts. Top bloke!

So, let’s get the obvious stuff out the way: the book’s full title is “American Sniper: The Autobiography of the Most Lethal Sniper in U.S. Military History”. Kyle, the primary author, was a former United States Navy SEAL. His two (two!) ghostwriters list this book as the shiniest jewel in their career crowns, according to their author websites. I suppose the stats back them up on that; American Sniper was published in 2012 and spent 37 weeks on the New York Times Best Seller list, followed by the release of a film adaptation (directed by Clint Eastwood and starring Bradley Cooper). Them’s some solid signs of success.

What’s the draw? Well, American Sniper tells the story of Kyle’s Texas upbringing, SEAL training, and a decade’s worth of tours in Iraq. During that time, he became “the deadliest marksman in U.S. military history”, killing somewhere in the vicinity of 255 people (160 of which have been “confirmed by the Pentagon”, whatever that means).

Aaaand I think I have to end my “objective” overview right about here, because American Sniper is fucking awful.

From the opening pages, you can just feel Kyle’s militarised boner pressing against your upper thigh. He’s going to be slobbering in your ear all night about how white men with big guns saved the day. Welcome to your spot in the American Imperialism Circle Jerk.

Lest you think I’m overstating it: by page 4, Kyle is passing moral judgments on the “worth” of Iraqi lives versus American ones. Oh, but he doesn’t call them Iraqis – they are the “bad guys”. They are also “pure evil”, and “savages”. He also calls them “motherfuckers”, and “whackadoos”. He “wishes he’d killed more of them”. I use all of these inverted commas to emphasise that these are the actual words he used to describe the human beings that he killed.

Pro tip: don’t try taking a drink every time he says “bad guys”. It won’t make the writing any better, and you’ll pass out long before you finish the book, so you’ll just have to start again the next morning (with a hangover).

He also calls the Iraqis “targets” now and then, too, like it’s a bad ’80s action movie. The lack of self-awareness, not to mention basic critical thinking skills, is truly astonishing. Catch-22 it ain’t. Kyle will, on the one hand, try to impress upon the reader that the war in which he was a willing (eager) participant was Absolutely Necessary, because the “bad guys” were coming to kill Americans. Why or how the “bad guys” were going to do that he doesn’t make clear, but regardless he is Absolutely Sure it is the case. As such, he sees no problem in taking out these “targets”, and talking about the joy of it ad nauseam.

On the other hand, Kyle seems to lack the mental capacity to attribute those same feelings – fear of strange invaders coming to kill you, doing everything you can to stop them in their tracks – to the people of Iraq. He storms and raids their homes, shoots them in the streets, ignores and denigrates the Iraqis who would fight alongside him… and doesn’t understand at all why that might piss them off. After all, he’s forgotten that they’re humans. They’re “targets”. They’re “bad guys”.

If you can get past his dehumanisation of the 25 million people living in Iraq before 2003 (hats off to you, I couldn’t), you’ll still have plenty of other shitty stuff to contend with. His false modesty is the worst. The whole book reads something like: So many people want me to tell my story, and I don’t know why! I’m just an average Joe! Also I really love killing people, I’ve killed lots and lots of people, more than anyone else, did I tell you? I’m really good at it. I’ve basically saved the world from evil savages. But I’m just a guy doing his job, and I can’t believe that sooooo many people want me to write a book… Appeals to group authority abound. I lost count of the number of times he did that before I was 100 pages in: “people” wanted him to write a book, “people” ask him all the time how many bad guys he killed, “people” ask him every day about his favourite gun… ugh.

It’s not just that the writing is exceedingly average (which, of course, it is). Kyle is just awful: literally him, his personality and his way of being in the world. At best, he’s just dull and clichéd. He fancies himself a real-life G.I. Joe. He got his first “real” rifle at age seven, and he talks about guns more often (and more lovingly) than he does his wife. He opines at one point, without a hint of irony, that the British soldiers “speak English funny”. The thrust of every anecdote is that he is a hero, anyone outranking him is an idiot, and the Iraqis are dispensable savages. Rinse and repeat.

If you told me that American Sniper wasn’t, in fact, a memoir, but instead the wish-fulfillment first novel of a socially-awkward young white man who spends 100 hours a week playing first-person shooter video games, I’d believe you, without question.

The bit that truly turned my stomach – the point at which Kyle became completely irredeemable in my eyes – was on page 161. He tells the most horrifying story of stealing a child’s video game from the house that he and his team raided and occupied. He talked about it so glibly, without a hint of remorse or regret – indeed, joking about the circumstance and inviting the reader to laugh along with him – that it brought me to tears. He literally stole from the child of a family that he turned out onto the street in a war zone. He turned a crib from that house into a sniper bed; he used it for eight hours, then discarded it, and moved on to the next raid.

He and his team did this a lot, according to Kyle. They would take over entire apartment buildings (“stinking slums”, he called them), give any civilian family they found $300, and tell them to fuck off and live somewhere else. All so they could use a single room as a sniper hole, for less than a day. He talks about it all with such immense pride, it’s fucking disgusting.

There were several controversies about the book following publication. Kyle described beating a man in the first edition, and the victim brought a lawsuit alleging defamation and unjust enrichment. Then there was the official investigation into Kyle’s claim that all of the book proceeds went to veterans’ charities (in fact, 2% went to charities, while Kyle’s family received $3 million). There were also squabbles over Kyle’s alleged embellishment of his military record and honours (seriously, by this point, who cares? seems to be the least of his crimes).

I make a point of not Googling books before I read them, so it was only after I’d finished American Sniper that I learned about Kyle’s death. He was shot by another veteran on a rehabilitation sojourn to a shooting range. It’s a tragic story, but it really doesn’t change my opinion, or this review, at all – the book must be judged by its own merit (or lack thereof) after all. It might be callous to say, but Kyle lived by the sword and he sure as shit died by it. I can’t say I was surprised.

So, is Kyle’s story one that should be told? Maybe. On its face, it’s an interesting window into a world that we don’t often see in full technicolour. But to do it this way, without a trace of self-awareness, not a hint of insight, nary a critical thought… is that really the best we can do?

My tl;dr summary: American Sniper is basically Fifty Shades of Grey, except that it’s the love story of Chris Kyle and his guns. It’s a few hundred pages of horribly-edited masturbatory anecdotes about war. If you want to learn the truth of war, seek it elsewhere. I would recommend American Sniper to precisely no one.