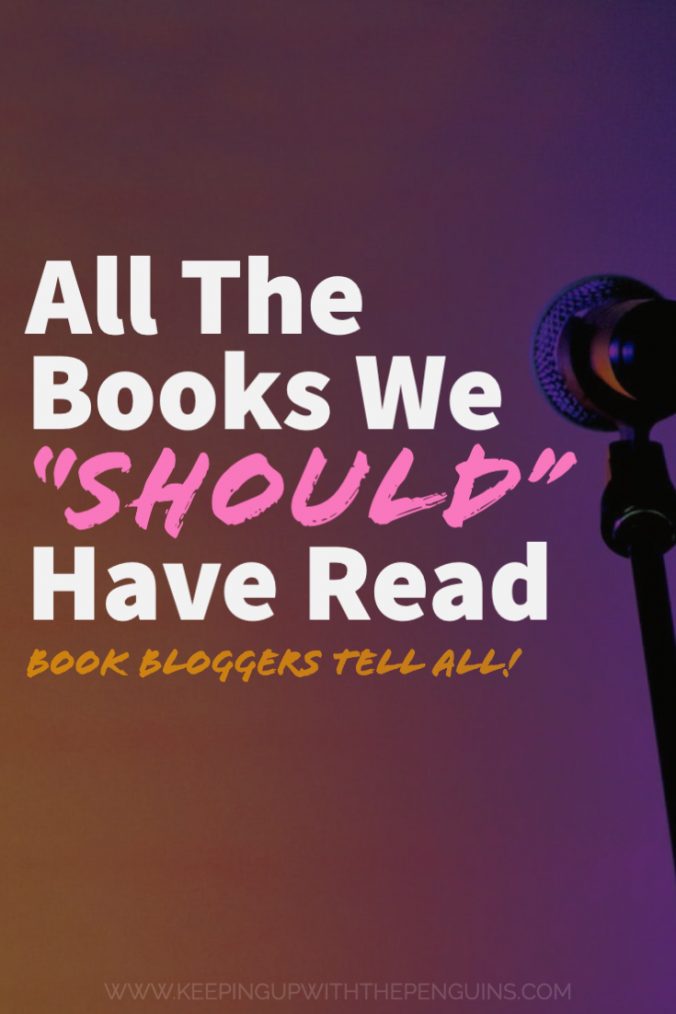 All The Books We Should Have Read: A Book Blogger Round Up

We hear a lot about how the online world, especially social media, is a cesspool full of haters and trolls clambering to bring each other down and destroy your self-esteem. I must say, that really doesn’t jibe with my experience. Ever since I started Keeping Up With The Penguins, I’ve been embraced by a community of reviewers and readers, all of whom have been nothing but warm and wonderful and welcoming. Book people really are the best people.

After my little round-up of my favourite book podcasts went gangbusters, I thought it high-time I do the same for my favourite book bloggers… but rather than just wax on about how much I love each and every one of them, I thought I’d do something different. This time, I reached out and asked them all a question: What’s one book you haven’t read (that you really “should”)? It’s called a one-question interview, and I tell you what, the responses are FASCINATING. Check them out…

*Note: some responses have been edited for length and clarity, but they’re all awesome!*

Christine at The Uncorked Librarian

“With the March release of the over-the-top YA novel Anna K, I knew for sure that I had to pick up Tolstoy’s Anna Karenina in the near future. It’s been deemed one of the greatest works of literature – EVER! – and as an English and History double major from a traditional all-women’s college, not to mention an MLIS grad, I cannot believe that Anna and I are not better acquainted. Maybe my hesitation comes from reading Madame Bovary in my freshman year of college? I’m not even sure why I associate the two!”

Check out Christine’s wrap up of awesome March 2020 releases – plus get inspired to travel with her diverse book and booze recommendations – over at The Uncorked Librarian.

“It’s only since I’ve started blogging that I’ve gotten really interested in reading nonfiction, due to the enthusiasm of other bloggers who introduced me to titles I would not have sought out on my own… I really need to read more of them, so I’m making an effort this year to read at least one nonfiction book per month.”

“One that I’ve had on my list for a while, but that seems especially necessary to read right now, is I Contain Multitudes: The Microbes Within Us and a Grander View of Life by Ed Yong. I want to know more about that invisible realm that lurks within us, and which suggests that we are more of an “interconnected, interdependent multitude” than we care to imagine. Can we quell our individualism for a moment, take that “grander view of life”, and maybe find a healthier way of co-existing? That’s what I’d like to know.”

See how Lory’s mission to read more non-fiction is going over at The Emerald City Book Review.

“The book that springs to mind when asked is We Begin At The End by Chris Whitaker. I have read about thirty reviews of this novel by other book bloggers and I haven’t come across a negative one yet. It seems to have the hallmarks of a truly memorable and touching read. Sadly, it is not yet available in Canada in Kindle format, so it will be quite some time before I have the opportunity to read it, but it’s number one on my wish list!”

Keep up with Lynne’s quest to get her hands on We Begin At The End over at Fictionophile.

Mandy at Off The Beaten Shelf

“I studied literature in college, which was a lot of ‘shoulds’ about reading because it’s professors constantly telling you what they, as the curriculum developers, think you should be reading. Since I graduated, I’ve been trying to unlearn the idea of ‘shoulds’ and just go with my gut and read whatever sounds interesting to me in the moment.”

“That being said, every time someone talks about Anna Karenina and Crime And Punishment, I always feel like I’ve missed out! I couldn’t pick just one, so those are my two – I’ll call them ‘enthusiastic shoulds’ – that I plan to get around to one of these days.”

Mandy writes a lot about the bookish life and publishing news over on Off The Beaten Shelf, go check it out!


Jess at Fiction No Chaser

“Anna Karenina by Leo Tolstoy was the first book to pop into my head when I read the question. Not only is this a book I ‘should’ read, it’s a book that has intrigued me for so long that I’m almost afraid to read it at this point. I went through a phase where I read tons of Russian literature. I’m the person who loved reading War and Peace, so it’s kind of strange that I’ve never read Anna Karenina.”

“It’s hard to avoid spoilers for this classic, so I do know how it ends, but I have avoided watching movies so that I can truly experience it when I finally take the plunge.”

Jess’s reading tastes are hella varied, so even if the Russian classics aren’t on your own TBR, you should definitely check out her hilarious reviews over at Fiction No Chaser.

Paula at The Vince Review

“My nemesis so far is Pendennis by William Makepeace Thackeray. It was an impulse purchase from a second hand shop, but has been taking the space of a house brick on my shelf and taunting me more with each passing month. It’s the novel Thackeray wrote straight on the heels of his more-famous Vanity Fair, but I haven’t come across anybody else who has even heard of it, let alone read it!”

*Note: Paula’s review of Vanity Fair is amazing! Mine slightly less so, but you can find it here if you want.*

“Pendennis’s immense size and scanty reputation presses heavier on my shoulders every day. The back cover blurb is the hook that holds me fast. It tells me that the book is a superbly rich and panoramic portrait of Victorian England which is unforgettable. I’d hate to be the chicken who missed having my cotton socks wowed off, just because I let disinclination get the better of me. And I’d love to be the reviewer to help restore an obscure gem to the light of day, so I really am going to read it. Just not quite yet. Please feel free to hold me accountable. I need to be free again!”

If you like Keeping Up With The Penguins, you’ll love The Vince Review – Paula and I share eerily similar tastes!

“At Booklist Queen, I help frustrated readers – tired of wasting their time on over-hyped bestsellers – find more great books to read. I have everyone covered with book recommendations (from classics to hot new releases) and an annual reading challenge. That said, one bestseller I’m ashamed to say I haven’t actually read is Erin Morgenstern’s The Night Circus.”

“I recommend this fantasy about duelling magicians all the time, because I have only ever heard great things. I already know I’m going to love it! I was captivated by her latest book, The Starless Sea, and my friends with similar reading tastes have all recommended it to me. Yet, it’s still languished on my to-read list for over six years.”

Rachael told me that she placed a library hold on The Night Circus immediately after responding to my question, good on her! Her book round-ups are extensive, honest, and awesome – find them all over at Booklist Queen.

Simon at Stuck In A Book

“The book I really should read, and definitely haven’t, is one I don’t know anything about. It’s Hive of Glass by Breton Amis. No one has ever recommended him to me, and I haven’t got a clue what Hive of Glass is about.”

“So, why have I chosen it? Chiefly because it’s been on my shelves for so long. There comes a moment in every avid book buyer’s life when they realise they won’t read all the books they buy. I currently have about 1700 unread books on my shelves. I have come to terms with the fact that book buying and book reading are two entirely separate pleasures that just happen to overlap. But when I bought Hive of Glass in 2003, I hadn’t reached that conclusion yet. I bought it out of idle curiosity, and fully intended to read it in the next few months. Here we are, the best part of two decades later…”

“Reading Hive Of Glass won’t make those other 1700 books get read, and it won’t change the sort of reader I am, but it might be a small gesture towards it. And, who knows, maybe it’s great?”

Simon really does have a knack for uncovering hidden gems, and he kindly shares his bounty with us over at Stuck In A Book.

“While there’s likely quite a lot of books that I should have read, I can’t go past The Wolf Hall Trilogy by Hilary Mantel (Wolf Hall, Bring Up The Bodies, and The Mirror And The Light). I know that’s three books, but from all the reviews I’ve read and discussions I’ve had with people, they all say that the three books form one complete story.”

“The reason I feel like I ‘should’ read these is that they are everything I favour: historical fiction, about the Tudor court, involving sagas with people betraying each other, betraying themselves, and betraying their King. But they are each tomes in their own right, and I’ve always worried they must get bogged down with too much politics. I’ve put Wolf Hall on my must-read list so I can dither no more. I think it’s going to be like the Game of Thrones series, just start reading and re-surface weeks later…”

“… Actually, the entire GoT series took me three months, but I’m sure the Wolf Hall trilogy won’t be like that. Right?”

No one tell her! But I’m sure when Theresa finds out, she’ll let us all know the full truth (and nothing but) over on her fantastic blog, Theresa Smith Writes.

Veronica at The Burgeoning Bookshelf

“I can think of so many books I should have read but the one that came through the strongest is A Little Life by Hanya Yanagihara. Ever since it was published in 2016 I’ve been seeing amazing reviews and I stop and think, ‘Will I?’, but 800 pages of heartbreak might be too much for me. I feel like I’m the only one who hasn’t read it… yet.”

Veronica’s definitely not the only one! Be sure to check out The Burgeoning Bookshelf for some (mostly) more lighthearted reads.


Big thanks to all the amazing book bloggers who took part in this one question interview! Know another book blogger who deserves a shout-out (or want to join in the fun with your own answer)? Drop a comment down below!

Her Body And Other Parties – Carmen Maria Machado

Tender Is The Flesh – Augustina Bazterrica