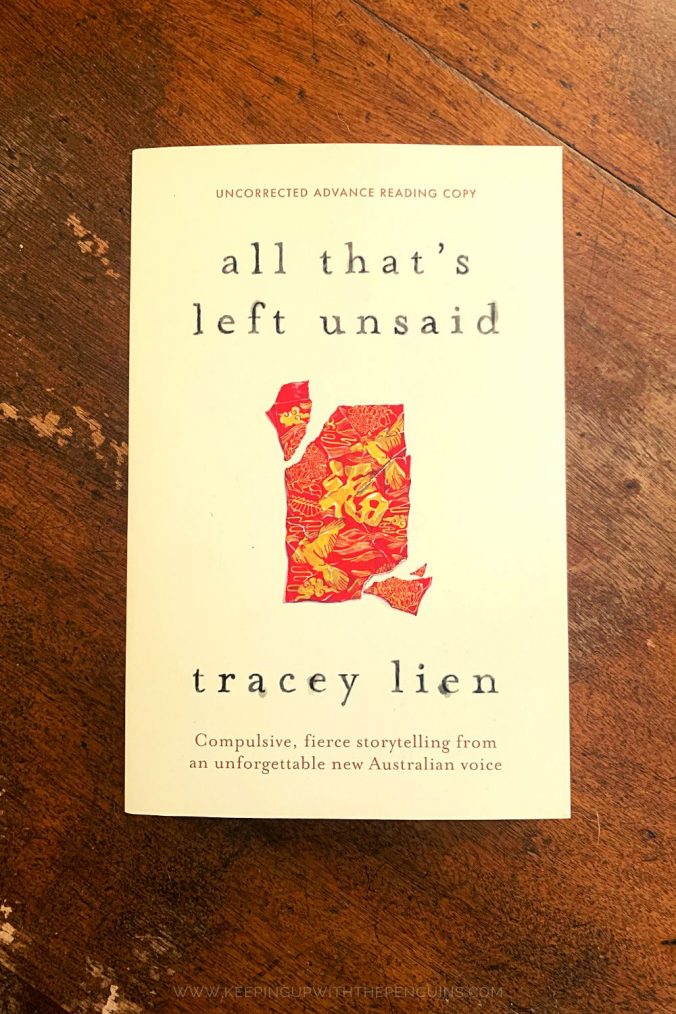 I was ecstatic to receive a copy of All That’s Left Unsaid from Harlequin Australia HQ/Harper Collins, especially after reading this rave review on Theresa Smith Writes. Tracey Lien’s debut novel examines the bonds of friendship, family, culture and community through the aftermath of a devastating crime.

There were a dozen witnesses to 17-year-old Denny Tran’s murder in Cabramatta’s Lucky 8 restaurant, but none of them saw anything. Every single one was looking away, in the bathroom, out the back. None of them can tell the police, or his bereft sister Ky, who killed Denny – or why.

When All That’s Left Unsaid begins, it’s 1996 and Ky is returning to her family home in Sydney’s south west. She has been living in Melbourne, working as a journalist, for years – and yet, it’s like she never left. Except that her brother is dead.

What do the living do but carry the weight of the dead?

She’s frustrated by the lack of answers from police about what happened the night of Denny’s death, so she begins investigating for herself. Hers is the primary perspective throughout All That’s Left Unsaid, but Lien also weaves in chapters that gradually reveal the witnesses’ back-stories and the reasons they might have for playing deaf, dumb, and blind.

The other voice in All That’s Left Unsaid is that of Minnie, Ky’s childhood friend – current whereabouts unknown to the reader (at first). Minnie is the voice in Ky’s head, urging her on, prodding her to up-end the status quo and seek the truth.

This is an amazing story of inherited trauma, the cruelty of loss, and the impact of xenophobia. Lien does a brilliant job of bringing mid-90s Sydney to life. Her characters are carefully crafted and completely believable. The comparisons to Celeste Ng are absolutely warranted. A strong debut from a fierce new voice in Australian fiction.

Under The Skin – Michel Faber