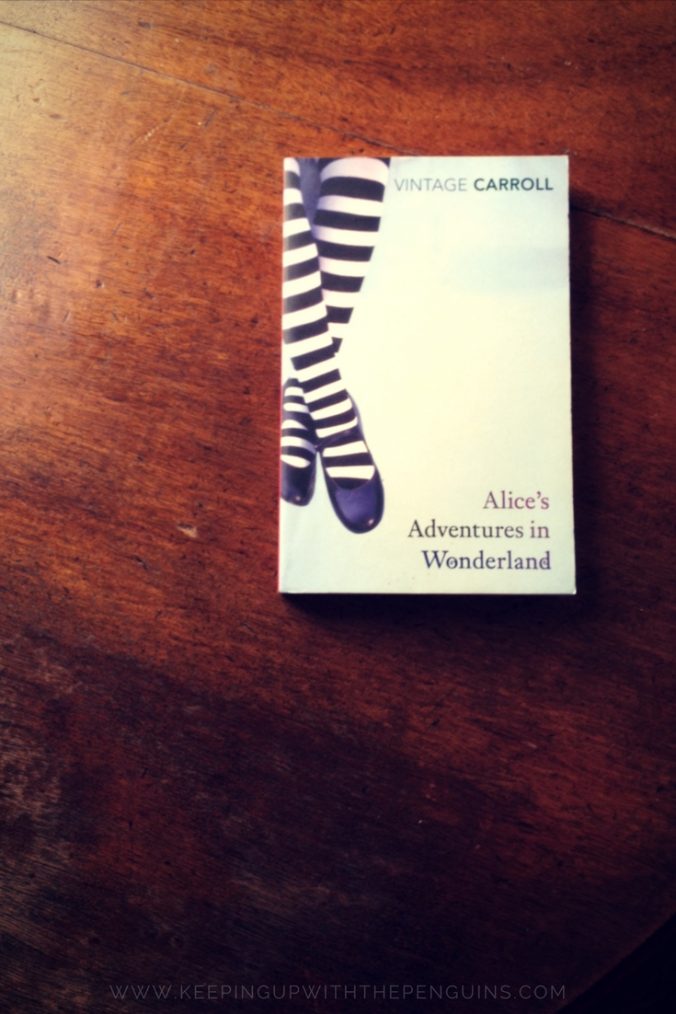 It seems fitting that, for the only bona-fide children’s book on my Keeping Up With The Penguins reading list, I picked up a gorgeous illustrated edition brand-new from my favourite second-hand bookstore. As Alice herself says, “What is the use of a book without pictures, or conversation?”.

Alice’s Adventures in Wonderland was first published in 1865, written under the pen name Lewis Carroll (real name: Charles Lutwidge Dodgson). The story’s origins are as pure as you can imagine. Carroll took a little boat ride in 1862 with his friend Henry Liddell’s three daughters. Because boats can be boring as fuck, Carroll improvised a story about a bored little girl named Alice who goes looking for adventure, to keep the three girls entertained for the ride. They loved it so much that the character’s namesake – Alice Liddell – asked him to write it down for her, and he set about it the very next day.

Alice’s Adventures in Wonderland – the story of a fantasy world down a rabbit hole, complete with anthropomorphised animals, chess pieces, and cards – went on to become become one of the most enduring literary nonsense books of all time. Its characters and imagery are basically inescapable in popular culture: from film, to theater, to rock bands, to costumes, to homewares, precocious little Alice can be found everywhere. Amazon lists the age-range for the book as 8-11 years, but fuck that – it’s a story for all ages, and ageism is for bores anyway.

I was somewhat familiar with the story already, despite never having seen the Disney film. (I’ll pause for effect here, to allow you to process your shock.) My parents opposed the American cultural imperialism perpetuated by Walt Disney, so I instead grew up with the real-action version on VHS. In the course of putting together this review, I went back and watched clips of it on YouTube, and the nostalgia hit me like a brick!

Don’t fall into the trap of thinking you shouldn’t bother reading the original Alice’s Adventures in Wonderland just because you saw the film a million times when you were a kid. Reading the book is a completely different experience to watching the movie. The cleverness of the wordplay is a lot more noticeable in writing, for starters. I was a tiny bit heartbroken to realise that my favouritefavouritefavourite line from the movie doesn’t work quite as well in print…

“‘Why did you call him Tortoise if he wasn’t one?’ Alice asked.
“We called him Tortoise because he taught us,” said the Mock Turtle angrily: “really you are very dull!”

… but that’s the exception rather than the rule. As you’d expect, given the way that Carroll came up with the story, the best way to experience Alice’s Adventures in Wonderland is probably to read it aloud to children. That way, you get the full impact of its genius.

Trying to describe the plot of Alice’s Adventures in Wonderland – covering off all the major characters and misadventures – in a couple of paragraphs for a review is basically impossible. Not because the story is difficult to follow, by any means, but because it’s all higgledy-piggledy nonsense, and you just sort of have to go along with it. A girl falls down a rabbit hole, eats and drinks some weird crap, grows and shrinks inexplicably, meets a lot of talking animals, battles evil queens and narrowly escapes having her head chopped off… on and on it goes! It’s both the best and worst acid trip you’ll find in all of literature.

Alice’s Adventures in Wonderland is so nonsensical that it basically becomes a blank canvas onto which you can project any type of story you want. For example, my preferred fan-theory-slash-alternate-reading is that Alice is the victim of a severe mental illness (she experiences auditory and visual hallucinations, delusions of grandeur, substance abuse, animal cruelty – it’s all there!). You could also read it as a vegan manifesto, if you want – especially one particular scene where the Red Queen introduces Alice to a mutton joint (“would you cut or eat someone to whom you had just been introduced?” the story asks). Carroll worked in a bunch of lessons on mathematics and logic, if you’re into that sort of thing. Literary scholar Melanie Bayley argued that Alice’s Adventures in Wonderland should actually be read as a scathing satire of new modern mathematics emerging in the mid-19th century. That’s not really my bag, but I’m sure Carroll was clever enough to do it! The most obvious allusions, though, are the historical references and the lessons in philosophy:

Carroll also liked a bit of poetry in his prose, and towards the end the verses become longer and more frequent. Everyone comes to Alice’s Adventures in Wonderland for the Jabberwocky poem, but my personal favourite is Old Father William.

None of this did Carroll much good in his day. Alice’s Adventures in Wonderland was very pointedly not named in an 1888 poll of the most popular children’s stories. It received pretty poor reviews, with critics paying more attention to the pretty pictures than to the story itself. It cruised along, almost unnoticed, until the very late 19th century when it won a new legion of fans – including (reportedly) Queen Victoria, and a young Oscar Wilde.

Still, Carroll got the last bloody laugh, didn’t he? The book has never been out of print. There are now over a hundred English editions, as well as editions in no fewer than 174 other languages. And, if that weren’t enough, little smart-arse Alice continues to be a major source of influence and inspiration for art of all kinds, over a century after that boring boat trip.

My tl;dr summary would be this: Alice is probably a delusional alcoholic, but reading Alice’s Adventures in Wonderland is a fun little trip down memory lane, regardless. Read it to feel like a kid again!

P.S.: Why is a raven like a writing desk? Carroll got so sick of people asking him the answer to the riddle that he wrote, in a later edition:

“Enquiries have been so often addressed to me, as to whether any answer to the Hatter’s riddle can be imagined, that I may as well put on record here what seems to me to be a fairly appropriate answer, ‘because it can produce few notes, though they are very flat; and it is nevar put with the wrong end in front!’ This, however, is merely an afterthought; the riddle as originally invented had no answer at all.”

I, for one, think that this is a super-lame and boring answer. I prefer the solution suggested by Sam Lloyd (a “puzzle expert”, which I can’t believe is a real job): “because Poe wrote on both”. Geddit?

My favourite Amazon reviews of Alice’s Adventures in Wonderland: