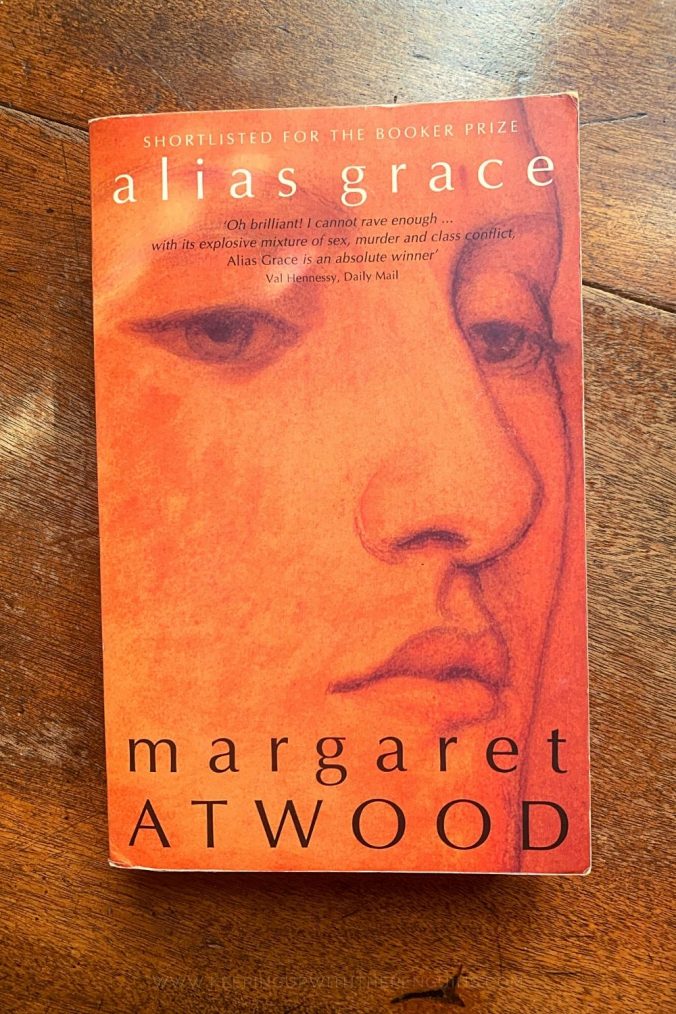 Alias Grace is a 1996 historical fiction novel by Canadian writer Margaret Atwood. In it, Atwood fictionalises the story of the real life and crimes of Grace Marks. She and another servant in the same household, James McDermott, were tried and convicted of the 1843 murders of the householder Thomas Kinnear and his housekeeper (slash secret lover) Nancy Montgomery. McDermott was sentenced to death and hanged, while Marks’s death sentence was commuted. Was she actually guilty, or was she wrongfully imprisoned?

Alias Grace begins in 1851, when the narrator, Grace, is 24 years old. She has already been imprisoned for eight years (yes, she was only 16 when all of this went down). Being a rather well-behaved prisoner, her days are spent as a domestic servant in the Governor’s home. She’s returned to prison at night.

The Governor’s wife rubs shoulders with a lot of progressive types, all of whom believe firmly in Grace’s innocence and campaign frequently for her release. Grace herself claims to have no memory of the murders, and whether or not she participated in them. She wasn’t crazy enough to remain in the Asylum, where they first took her to assess her apparent amnesia, but she’s clearly got a few loose in the top paddock. So, her advocates call in Dr Simon Jordan, a psychiatrist (psychiatry being a burgeoning field at the time, often criss-crossing with other, less reputable, disciplines), to interview her and figure out – once and for all – whether she is a murderess.

Alias Grace is styled as a quilt (quilting being a frequent motif in Grace’s narrative) of epigraphs, letters, confessions, reports, and Dr Simon’s experiences, between and around Grace’s account of her own story. Some of these are drawn from real documents about the real Grace Marks and her crimes – but the Dr Simon character and a lot of what Grace accounts is fictional. Atwood does it so smoothly, though, that you’d believe it was all one or the other.

Dr Simon gets Grace to tell him her life story from the beginning – emigrating from Ireland to Canada, finding work as a servant, and so on – with the hopes that it will trigger her memories of the murders (or at least give some clues as to why they’re absent). I assumed I could see where Atwood was going with it all – it was clear early on, to me at least, that she was going to leave us in a grey area, with no confirmation as to what “really” happened – but she still managed to squeeze in a few surprises.

I don’t think it technically counts as a spoiler to tell you that Grace is pardoned in the end (because the real Grace was too, duh). She begins a new life in the United States, with a new name and a man who returns from her past and marries her (I won’t tell you who because that would be a spoiler – there are a few contenders).

Atwood wraps things up with a detailed Afterword, explaining what is fact and what is fiction (see above) through Alias Grace. I was interested to see that she originally encountered the story of the real Grace by reading Life In The Clearings Versus The Bush by Susanna Moodie. Atwood absolutely savages Moodie in the text of Alias Grace, wasting no opportunity to point out that her account of the crimes and Grace’s demeanour were absolute bullshit (ahem, gross over-exaggeration, I mean).

One of the aspects I really loved was Grace’s position, as a servant. Nearly every historical fiction novel around this period seems to focus on the lords and ladies, the wealthy and privileged – it’s one of the reasons I tend to shy away from the genre. I always find myself wondering what stories aren’t being told, the men and women who empty the chamber-pots and wash the shirts and cook the meals. Alias Grace finally gave me the insight I was looking for.

Alias Grace is a fascinating and compelling work of historical fiction, one that tells us just as much about Canadian society and gender roles and the field of psychiatry at the time as it does the crimes of Grace Marks. I also loved the sneaky Gothic elements, which felt very true to form for a story of this nature. This book both satisfied my Murderino curiosity and met high literary standards – no mean feat, as it would have been easy to make this story schlocky and scandalous. Atwood has expressed some troubling views of late, but damn if she isn’t a masterful storyteller.