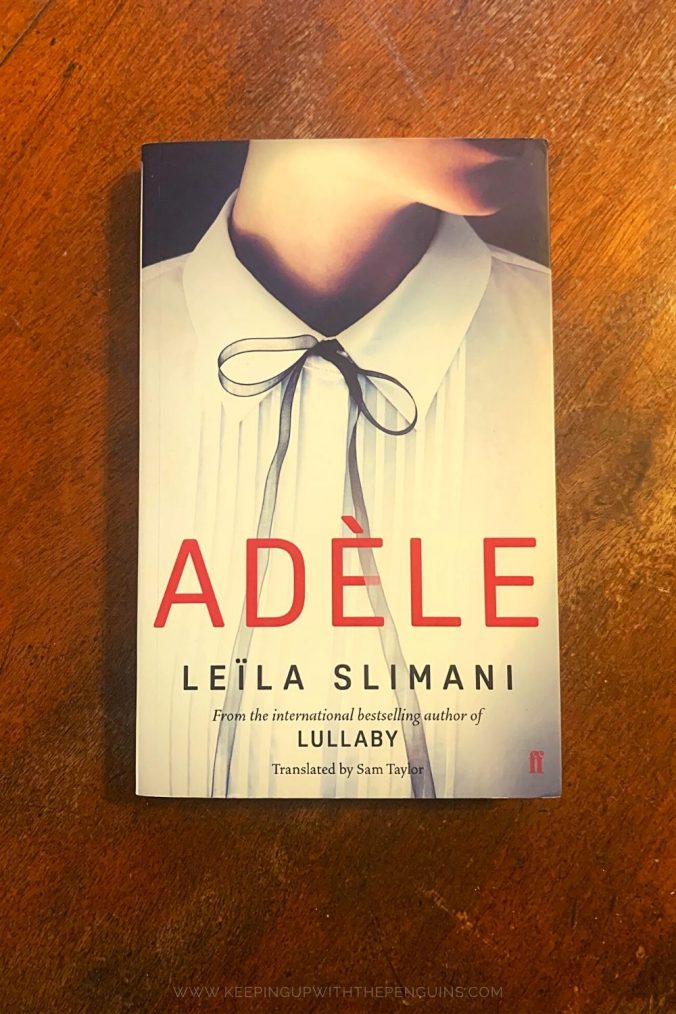 Leïla Slimani is probably best known for her debut novel (Lullaby, for which she won France’s most prestigious literary prize, the Prix Goncourt), but for some reason I was more drawn to pick up this one – which, incidentally, she actually wrote before her best-seller. Adèle was first published in the original French in 2014, then this translation into English by Sam Taylor did the rounds in 2019, as the #MeToo movement was ramping up.

The #MeToo connection is significant because of Adèle‘s premise and content. The titular character Adèle is a respected journalist who appears, from the outside, to have a perfect life – husband, kid, and a swish apartment in the eighteenth arrondissement of Paris. It’s all a mirage. Adèle is actually a sex addict, seeking ever-more brutal carnal encounters to satisfy her desperate need. She’s kept her addiction a secret, from her husband and colleagues (well, the ones she hasn’t slept with, anyway), but the cracks are beginning to show.

Adèle begins with her leaving the house early, before her husband and child wake up, to search for sex on the way to work. You should know that Adèle is a Moshfegh-esque protagonist, one whose single-minded desire and self-interest will undoubtedly turn off a lot of readers. It’s hard to fathom her logic, or keep up with her swings from self-chastisement to self-abasement, unless you’re familiar with the rhythms of addiction on a personal level. Adèle is effectively delusional, and she (almost) sucks the reader under with her.

The story is told in short, sharp chapters. There’s not much of a plot, and very few other characters besides Adèle and her immediate family. The tone is flat, humourless, and pacy as a standard domestic-noir thriller. There’s nothing to distract from Adèle’s descent into complete self-destruction, until a shift about two-thirds of the way through, which introduces her husband’s point of view.

I’ve seen Adèle described as a “modern-day Madame Bovary”, which works for the most part as a parallel, except that as I remember it, Flaubert’s protagonist was, in some small measure, understandable. Emma was raging against the patriarchy, against the oppressive society and marriage into which she was bound, and heck – she liked a drink, at least. She had fun. Adèle (the book and the character) is completely humourless, completely anhedonic, and it’s hard to see what she even gets out of the addiction that has wholly consumed her. Of course, that’s the point, but… as a reader, I wished I’d had some kind of “in” with her character. It would have made Adèle a story, rather than just a commentary on power.

Because that’s what I’ve decided this book is: a comment on how men and women find power, how they give it up. The “truth” of the character of Adèle is evasive. Adèle is all effect, with little interrogation of the cause. It’s interesting, it’s a good conversation-starter, but it’s not going to sweep you away or pull on any heart-strings. I’d recommend this one for your book club if the chat has been a bit stale lately, but skip it if you’re just looking for something to curl up with on the couch.

My favourite Amazon reviews of Adèle: