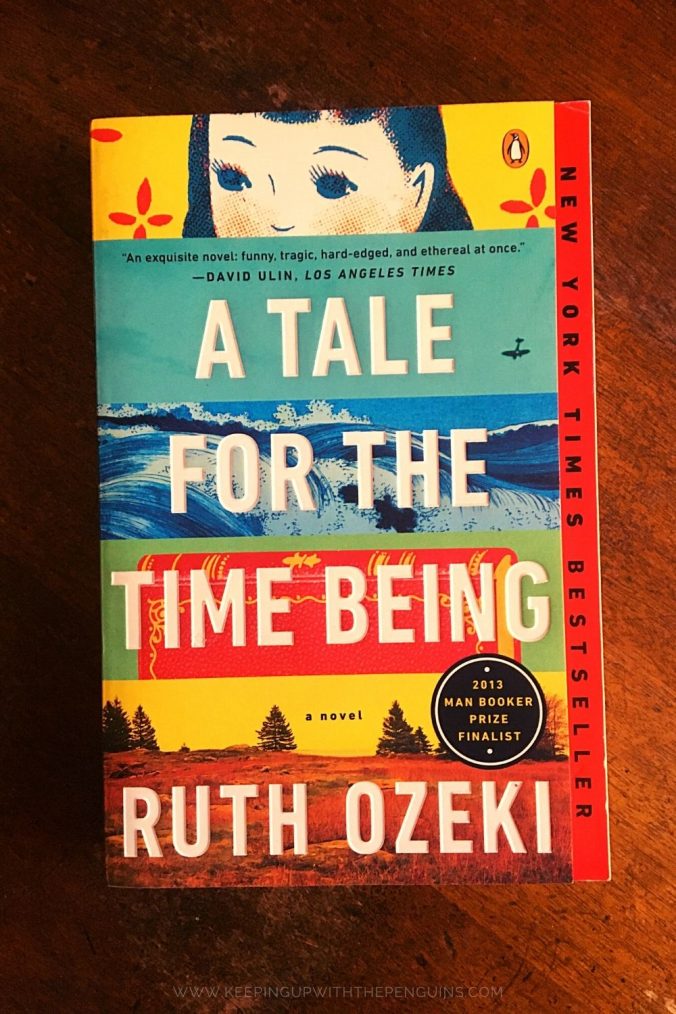 A Tale For The Time Being – Ruth Ozeki

Very few blurbs have grabbed me like that of Ruth Ozeki’s A Tale For The Time Being. It’s a brilliant premise: a writer finds a diary, locked inside a Hello Kitty lunchbox, washed up on the beach in remote coastal Canada. She suspects it to be debris from the 2011 Tōhoku earthquake and tsunami. She reads the diary, and finds herself increasingly obsessed with the life and inner world of 16-year-old Nao, the diary’s keeper. I mean… isn’t that fascinating?!

The story unfolds through the two alternating timelines, Nao’s in her diary and a close third-person narration as Ruth reads it (yes, the writer character’s name is the same as the IRL writer, it’s all very meta). Normally, writers writing about writers bugs me, but it didn’t at all in A Tale For The Time Being, possibly because the third-person POV gave it some distance to stop it feeling too schlocky, and Nao’s diary entries broke things up.

Nao is a fascinating character. She was raised in Silicon Valley, a completely American upbringing, until her father lost his job and the family was forced to relocate back to Tokyo. Her father is depressed, isolated (she calls him hikikomori), and suicidal, while her mother is barely present, working to keep a roof over their heads. But if things suck at home, they’re even worse at school, where Nao is tormented by her classmates and forgotten by her friends back in the States.

Hearing all that, you’d probably expect (as I did) that Nao’s diary would be wistful and angsty, but she has a lot of vigour. Her initial diary entries read as though she’s grabbing you in a big bear hug and shouting HELLO in your ear. She’s like a Japanese Holden Caulfield, but far more likeable.

Nao is just about driven to suicide herself, but she commits to recording as much as she can about the life of her 104-year-old grandmother, a “famous-anarchist-feminist-novelist-turned-Buddhist-nun”, before she dies. That’s the purpose with which she begins the diary, but over the course of A Tale For The Time Being, her interjections and digressions reveal far more about her own life.

(And I suppose this is as good a time as any to give a few trigger warnings: suicidality and bullying, of course, and also sexual assault, war crimes, and one natural – but horrific – dog death.)

Ruth, reading all of this, becomes deeply emotionally invested. Not only is she reading the diary, but she’s constantly searching the internet, seeking out translators, trying to find any skerrick of evidence she can that Nao (and/or her family) survived the tsunami of 2011. Of course, she does eventually manage to connect the dots and find out what became of all the players – but not in the way that you’d expect. A Tale For The Time Being takes some weird detours into metaphysics and philosophy, but it still comes to a satisfying (though pleasingly not saccharine) conclusion.

Off the page, Ruth Ozeki (the real life one) seems as fascinating as her characters. She’s “a novelist, filmmaker, and Zen Buddhist priest” according to her author bio. In fact, she was the first Zen Buddhist priest to be shortlisted for the Man Booker Prize (for this book, back in 2013). And she also thanks one of my faves, Karen Joy Fowler, in the Acknowledgements for giving her courage “at a critical moment in time”.

A Tale For The Time Being would be a great pick for fans of Mieko Kawakami, though Ozeki’s prose is a little more smooth and inviting, a little less edgy and devastating. I was so thrilled to discover that the story lived up to the high, high expectations the blurb had set.

My favourite Amazon reviews of A Tale For The Time Being: