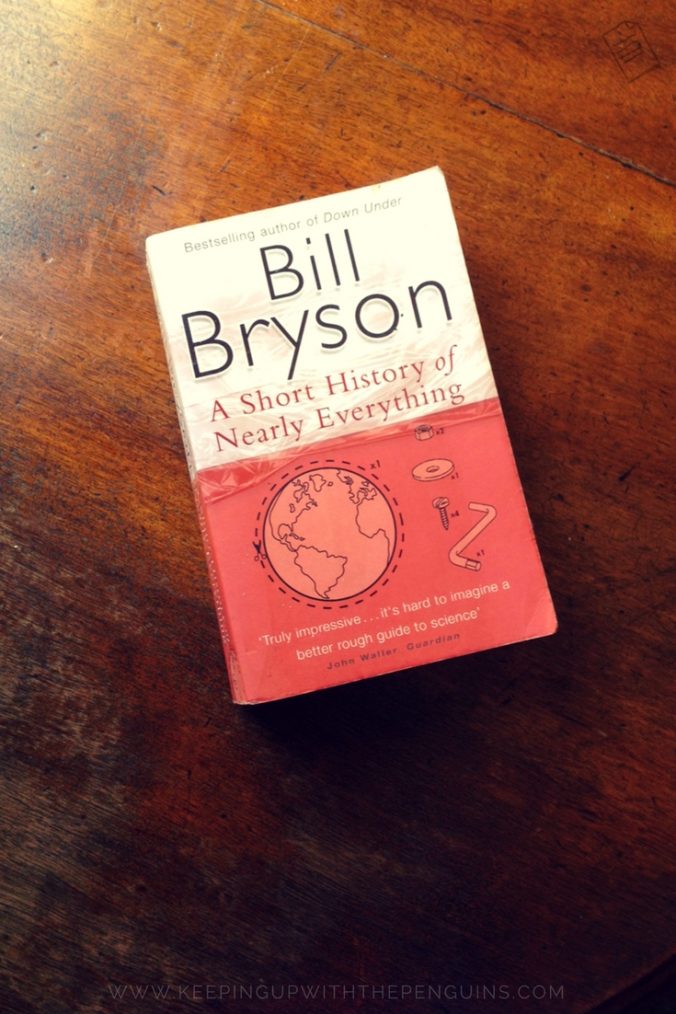 A Short History Of Nearly Everything – Bill Bryson

I remember reading Bill Bryson’s Down Under as a tween, and while my brain has written over most of the actual content, I do remember howling with laughter. I figured I could do with a bit of a giggle after The Divine Comedy, so I went with A Short History Of Nearly Everything as my next undertaking from my reading list.

I wasn’t sure where to find A Short History Of Nearly Everything when I was trawling through my favourite secondhand bookstore. Would it be under History? Science? Reference? Ultimately, I found it buried in the miscellaneous no-mans-land shelf, just below “Philosophy”, which seemed fitting. I thanked my lucky stars that it was a paperback – this book is a monster, and I’ve seen a few hardcover copies that could be used for deadlifts.

One of my favourite things about secondhand books is the inscriptions you find in the front. This one reads: “July ’04 – Dear Rodger, The best present I could find for the Man who knows (nearly) everything! Thanks for your time, encouragement… and straight talking. Good luck with everything and I will see you soon! Lyn x”. Shout out to straight-talking Rodger, wherever he is. I hope he finished the book and (now knowing everything) no longer needs it.

On with the review: A Short History Of Nearly Everything does exactly what it says on the label. It serves as a crash-course introduction to most areas of scientific inquiry, covering off everything from the Big Bang to evolution to quantum mechanics. It sounds like it should be a snooze-fest, I know, but it’s written in a folksy, conversational style that most of the general public will find easily accessible. Proof in the pudding: it was one of the best-selling pop-science books of 2005.

Its big selling point is, of course, that it is Science for the Everyman – but don’t be fooled! There’s some shit in here that will fuck with your thinking meat. I thought I’d burn through it really quickly, given Bryson’s famously-readable voice, but I found I had to go back and re-read a lot of passages a few times over in order to truly wrap my head around their meaning.

It’s hard to comprehend, for instance, the true size of the solar system (it turns out those diagrams in your textbooks at school were a lie). Fortunately, Bryson breaks up the hard parts with gossipy tid-bits about the history of science: who slept with whom, who hated whom, who stole ideas and passed them off as their own. He also manages to work in a few laughs.

Our tolerance for plutonium is zero: there is no level at which it is not going to make you want to lie down.

A Short History Of Nearly Everything

More than anything, Bryson makes it abundantly clear how little we actually know – even about things that we think we know. Fascinating stuff!

Haters on the internet have pointed out some factual errors and inaccuracies (of course), but in large part these are solely due to new discoveries made, or reclassifications, since publication. A Short History Of Nearly Everything is over a decade old, for fuck’s sake – I think we can forgive Bryson for saying that Pluto is a planet.

A Short History Of Nearly Everything is perfect for anyone who finds themselves in need of fun facts that can be delivered smugly, over a water cooler or knock-off beers. I will definitely read it again, just for fun, and so it gets the coveted status of Recommended here at Keeping Up With The Penguins.

My favourite Amazon reviews of A Short History Of Nearly Everything: