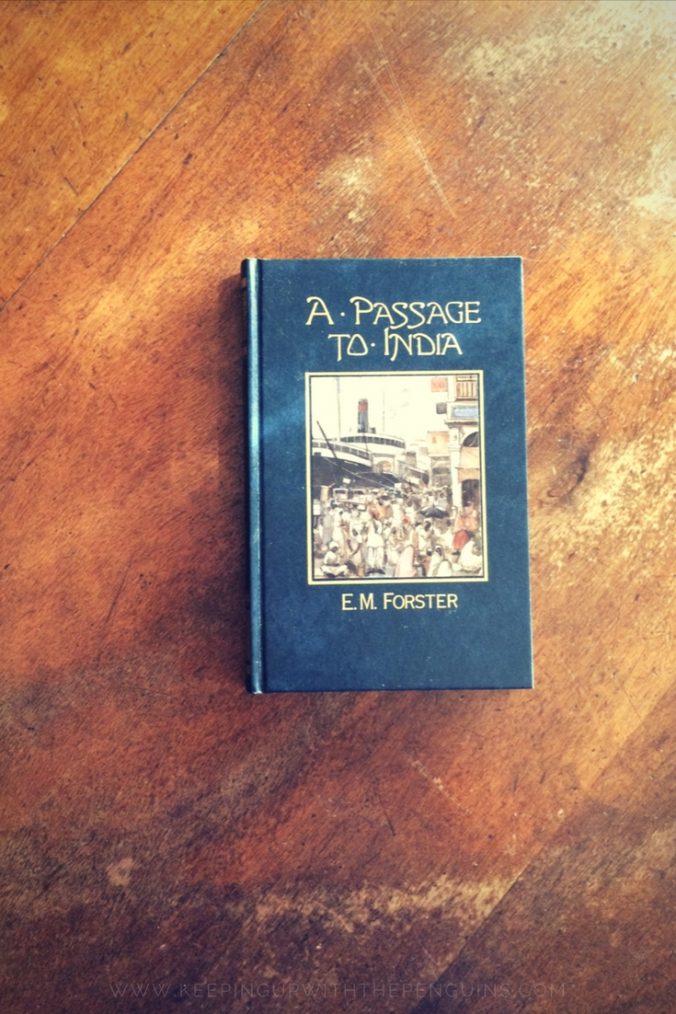 A Passage To India – E.M. Forster

Look at this gorgeous pristine hardcover edition of A Passage To India. I picked it up from my local secondhand bookstore for just (get this) $8! I’m not usually a hardcover reader, but for a bargain like this… I can be convinced.

A Passage To India is a 1924 novel by English author E.M. Forster. He based it on his own experiences in the subcontinent, and nicked the title from Walt Whitman’s 1870 poem “Passage to India” (published in his Leaves of Grass collection). The novel won the 1924 James Tait Black Memorial Prize for fiction, and has since been named in multiple “top 100 books written in English” lists. That’s how it ended up on my reading list, as a matter of fact!

Going in, I knew shamefully little about the British Raj. If you’re in the same boat, don’t worry, I’m here to break it down for you. The British Raj is the name given to the rule by the British Crown in India, which lasted from 1858 through to 1947. A Passage To India required quite a bit of Googling, because I was completely unfamiliar with the language and customs of that period. If you’re considering reading this one, brushing up on some background knowledge beforehand will greatly enhance your understanding, so fire up Wikipedia and get down to business!

The story begins with Adela Quested, a young British school teacher. She arrives in Chandrapore (a fictional Indian city where the majority of the action happens), accompanied by her friend Mrs Moore. Adela has come to India to decide whether she wants to marry Mrs Moore’s son, Ronny Heaslop (yes, you had to travel half-way around the world to find a husband in the days before Tinder).

An English bloke, Cyril Fielding, hosts a party shortly after her arrival. There, Adela and Mrs Moore meet Dr Aziz, and he’s pretty much the main man of the story from then on. He makes a (totally empty) offer to host them on an outing to the Marabar Caves, but the silly ladies actually take him up on it, so he’s totally screwed.

Now, a lot of the story seems to be implied, written into the subtext, so I may have missed quite a bit. On the one hand, A Passage To India taught me a lot (especially with all that Googling), but on the other I really wanted to tell Forster that assuming the reader’s prior knowledge of the social mores of the British Raj really isn’t the best way to get your point across. I did notice, though, that he had a really interesting way of privileging the Indian perspective. Maybe I’ve been buried in the Victorian classics for too long, but it felt really refreshing to see those colonial pricks get called out for what they were.

“No, that is where Mrs Turtan is so skillful. When we poor blacks take bribes, we perform what we are bribed to perform, and the law discovers us in consequence. The English take and do nothing. I admire them.”

A Passage To India

It’s not all race- and class-commentary – there are some absolutely hilarious moments! I couldn’t always work out whether Forster was being ironic or whether the comedy was incidental, but I always got a chuckle either way.

Undeterred by the expletive, the old man swept on.”

A Passage To India

Things started to get a little clearer about half-way through, when the false rape allegation happens. Oooh, yeah – that’s a thing! See, during the trip to the Marabar Caves, Adela thinks she finds herself alone with Dr Aziz in one of the caves, and she panics and flees. She tells everyone that Aziz followed her into the cave and tried to grab her, and she fended him off. In reality, he was in another cave altogether – and Forster makes it pretty damn clear that the word of a white woman is worth far more than the defense of a brown man.

The colonisers have very little evidence, but they still arrest Aziz and put him through a trial. Cyril Fielding (the guy who threw that party back at the beginning) is ostracised and condemned as a blood-traitor when he publicly declares his support for Aziz. Mrs Moore also believes in Aziz’s innocence, but she ships back to England (and dies on the way) before she can testify for him. So, pretty much everyone who supports Aziz in his defence is cancelled or dead.

The trial goes all to hell when Adela recants (she confesses that she “misinterpreted the cave’s echo as an assault by Aziz”, which is the weakest fucking excuse I have ever heard in my life and I literally rolled my eyes). All the racial tensions boil over, and a full-on riot breaks out. This is where A Passage To India really retains its relevance to today’s social dynamics, and it’s hella interesting. Aziz has refused to be a “good Indian” in response to Adela’s accusation, and then again when she withdraws. He is absolutely pilloried by the British for it – much like Western countries still carry unfair expectations for “grateful migrants” (if you’re not sure what I mean by that, check out this fantastic piece).

“You think that by letting Miss Quested off easily I shall make a better reputation for myself and Indians generally. No, no. It will be put down to weakness and the attempt to gain promotion officially. I have decided to have nothing more to do with British India, as a matter of fact. I shall seek service in some Moslem state, such as Hyderabad, Bhopal, where Englishmen cannot insult me any more. Don’t counsel me otherwise.”

A PAssage To India

Interestingly, Forster’s earlier drafts of the novel actually had Aziz guilty of the assault, and convicted at trial. Forster changed this for the eventual publication, and wrote a more ambiguous ending. I’m glad he did, to be honest; I think a lot of the value of A Passage To India (as far as I’m concerned) would have been lost with the original version.

And what happens in the end? Well, Adela flees back to England, never to return to India. Aziz severs all ties with Fielding, assuming that his friend actually had the hots for Adela (which, of course, he didn’t, but them’s the breaks). Two years later, Aziz and Fielding reunite, having moved on to living their best lives. Aziz is a physician to a Raj, and Fielding has married Mrs Moore’s daughter. The final pages of the books are dedicated to Aziz, as he explains to Fielding (and the reader) that he still believes India can be reunited and free from the British Raj. He explains that he and Fielding cannot be friends until the British go back to where they came from. It’s not a happy ending, per se, but it’s sure as shit pretty poignant in a post-Brexit world.

If you’re going to read A Passage To India, you need to bear in mind not only the social mores of the British Raj but also the context in which the book was published. Most books about India at the time described it as a wasteland full of savages (think the white guys in Disney’s Pocahontas), and romanticised colonisation. Forster completely turned all that on its head, writing a story where the Indians were the good guys, and the British were the ones cocking it all up.

A Passage To India isn’t perfect, though (for starters, it didn’t even really condemn British imperialism, more just pointed out that it wasn’t entirely perfect), and there are some very valid criticisms of how Forster handled his portrayal of race relations in India.

I wouldn’t call A Passage To India a fun read, mostly because it’s bloody hard work. It’s certainly not for everyone. But if you’re interested in expanding your horizons and you want to start looking into post-colonial literature, you probably want to give A Passage To India a once-over first.

My favourite Amazon reviews of A Passage To India:

7 Most Boring Tropes In Literature

How To Remember What You Read