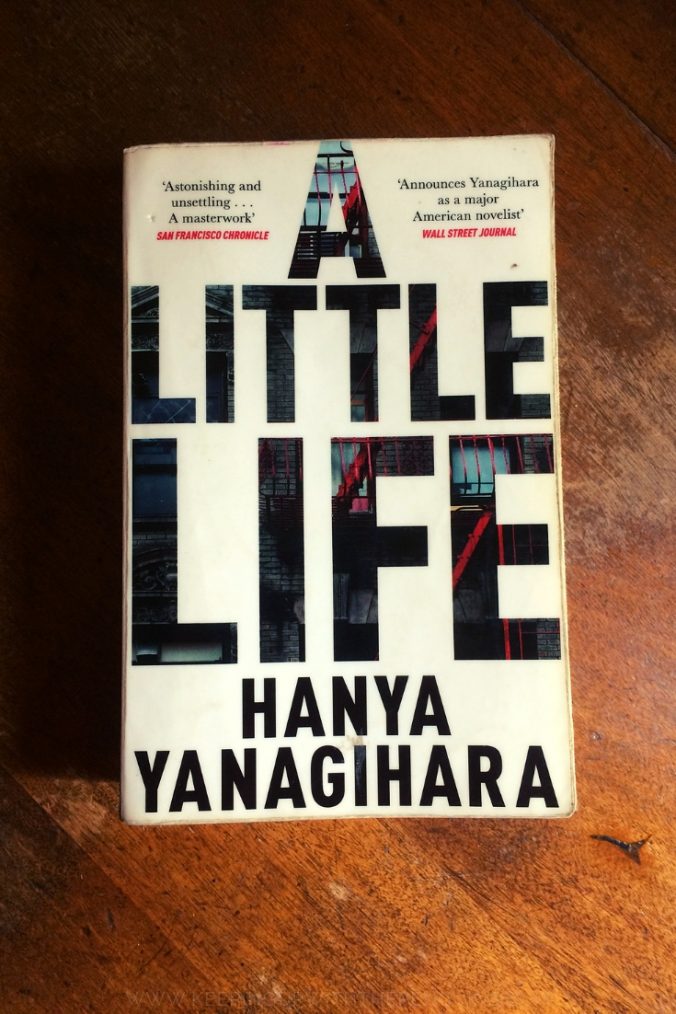 Normally, when you set about tackling an 800+ page epic study of humanity, trauma, and relationships, you’re talking about one of the classics, a book written back in the day before publishers cared about “readability”. Not so with A Little Life: I have no idea how this book made it through the vetting process, but here we are. This 2015 novel by Hanya Yanagihara became a best-seller, despite its length and… shall we say, challenging content.

A Little Life begins with four graduates who have moved to New York. There’s Willem (the kind, handsome one), JB (the quick-witted, artistic one), Malcom (the frustrated, upwardly-mobile one), and Jude (the brilliant, enigmatic one). They all exist on a wide spectrum of identities (racial, sexual, familial, and otherwise), a pleasingly diverse crew with deep and abiding love for one another, even as life scatters them across different courses. One of the really interesting aspects of this book – which you might not realise until much later – is that it’s not anchored in any particular time period. It’s just vaguely contemporary, with no reference to September 11 or any other cultural landmarks that would anchor it in our minds, giving it a timeless quality right from the outset.

For the first fifty or so pages (a drop in the bucket of this epic), they all go to parties, move apartments, hook up, squabble, gossip, all as you’d expect. There are all the usual schisms that threaten friendships – money, politics, miscommunication – but also a deep respect that seems capable of withstanding it all. The story focuses largely on JB, Malcolm, and Willem; Jude’s story is only partly revealed, as background. He exists on the periphery, of the friendship and the narrative. Then, so gradually you might not notice at first, the story of A Little Life morphs into something different, something more than your bog-standard New York bildungsroman.

The friendship ensemble slowly recedes, leaving Jude in the spotlight. Yanagihara drip-feeds his back story to the reader – how he was found abandoned as an infant, near a garbage can, adopted by monks who mistreat him in horrifying ways, only to jump from the frying pan into the fire, and so forth. The story of Jude’s present is chronological, and his past is revealed through seamlessly chronological flashbacks too, making for smooth parallel narratives.

I’ll stop beating around the bush, because if you’ve not read A Little Life and you’re reading this review to work out whether or not to pick it up, you need to know: Jude was sexually abused, repeatedly, in all manner of ways, from a very young age. A Little Life is the story of how this trauma reverberates throughout his life. There’s graphic detail – a lot of it – and very little, if any, justice or redemption.

A Little Life is an UNDERTAKING. It’s not slow moving, by any means, but it is LONG. You need to be ready to really immerse yourself in the lives and relationships of these characters, including Jude’s (though he has it the worst, the others’ aren’t a picnic, either). Yanagihara seems determined to make the reader work for it. She reveals things by surprise, mentions facets of the back-story in passing that cast all-new light on everything that has come before – that’s why A Little Life is NOT skimmable, despite its imposing length. If you let your eyes skip down half a page, you’re liable to miss something crucial and you’ll be forced to circle back, re-live it all over again (the way that Jude has to).

It took me an embarrassingly long time to work out why A Little Life felt so much more overwhelming and devastating than other books I’ve read (and I’ve read some real downers). It’s the damn MAGNITUDE of the thing. It’s both incredibly long and incredibly intimate, which means its punches land much harder. The content isn’t necessarily more traumatic or triggering than you’d find in other books, but there’s SO MUCH of it, and it requires such a HUGE investment on the part of the reader…

Reading A Little Life actually forced me to confront a really uncomfortable question: at what point does literature become tragedy porn? The Sisyphean nature of Jude’s traumas – he comes so close to contentment, time and again, only for the boulder to roll back down the hill and absolutely crush him – gave me pause. Every time he reaches out, makes any headway at all in reckoning with his past, it manifests in another cycle of abuse. Yanagihara renders it in such a way that it is never titillating or sensationalist; this isn’t schlocky horror or crime fiction, and yet… the sheer magnitude of the protagonist’s suffering is enough to make bile rise in the back of your throat. The only thing that makes it bearable is the intervening chapters where she portrays Jude’s life as a successful corporate lawyer, with fulfilling friendships and a found family worth their weight in gold.

You need to know there are no happy endings here. In an article for New York Magazine, Yanagihara said that she wanted to “create a protagonist who never got better”. His relationships with his friends and his adoptive father evolve, but they never “heal” him. Anyone who recommends this book to you without a major trigger warning is a psychopath and a bum, and you should cut them out of your life ASAP. Any time anyone brings up the “debate” about whether and why trigger warnings should be used, A Little Life is the book that proves the affirmative.

One more important thing to note (just a sec, let me drag out my soap box): I’m once again calling your attention to the fact that if the central characters of this novel had been women, rather than men, A Little Life would have been relegated to the category of “women’s fiction” and probably published with a flower on the front cover or some shit (if it were published at all). As it stands, the relationships between these men, and their emotional lives over the course of decades, are the soul of this story. It is, thus, lauded as epic literary fiction. I’m just saying.

Let’s not end on a bum note. Yay for Yanagihara, who shot to international literary stardom with this novel. It was short-listed for the Booker Prize in 2015, and later ranked in The Guardian’s list of the 100 best books of the 21st century. I’m not sure what she’s written lately, but – as good as A Little Life was – I’m not sure I’m all that eager to find out. I need to lick the wounds this novel inflicted for a bit, before I go begging for more.

My favourite Amazon reviews of A Little Life: