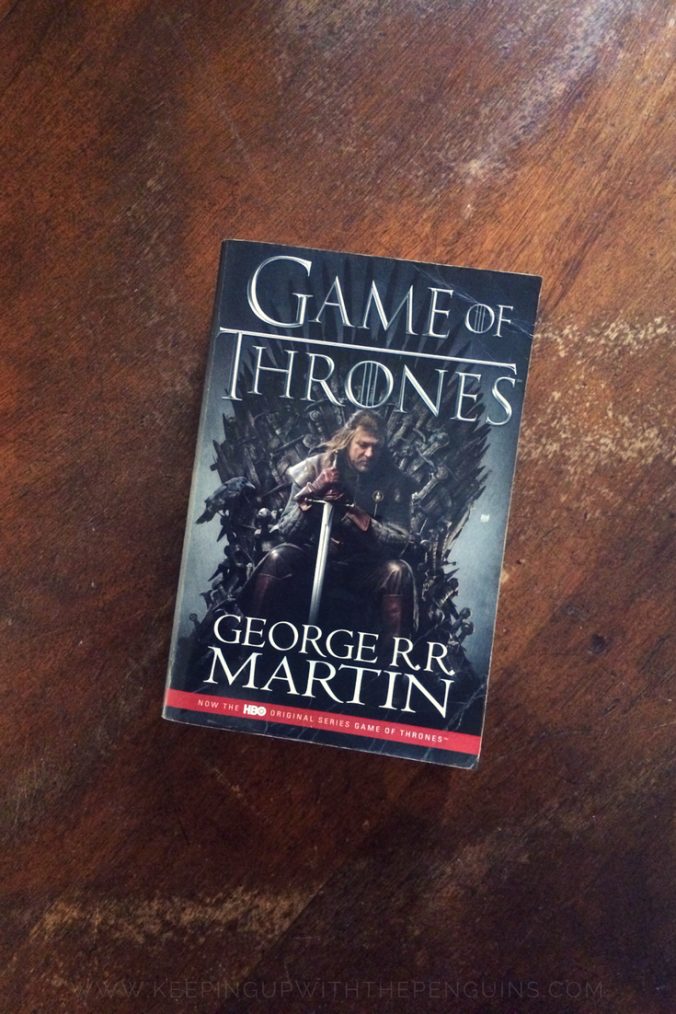 Fantasy is not my first choice for genre fiction. I really struggle to keep track when there are eight hundred different characters, who all seem to have similar names, spread across a huge world that is completely unfamiliar to me… so I was pretty hesitant cracking open A Game of Thrones. I don’t live under a rock, so of course I’m already familiar with the HBO series, and I hoped that having watched it (a couple times over, no less) would help me keep track of what was going on. And, on that note, if you’re one of those people that completely pooh-poohs the television adaptation, we’re on completely different levels. I went so far as to make a solemn vow before I started reading that I would never become one of those arseholes that interrupts every GoT conversation by saying “Have you read the books, though?”, and I fully intend to stick to that. I like the series, and I’m no elitist. So, proceed with this review at your own peril.

And a note on the title: the original publication was, indeed, called “A Game of Thrones”. It wasn’t until after the HBO series premiered in 2011, and the book soared to the top of the New York Times Best Seller List, that the publisher released this paperback tie-in edition that excluded the indefinite article. Better brand recognition, and all of that…

Anyway: A Game of Thrones is the first in Martin’s Song of Ice and Fire series. I was pretty surprised to learn that he first started writing it back in 1991, and the debut wasn’t published until 1996. I had no idea it was that old! I know everyone bitches about how long it’s taking him to finish the sixth and seventh books in the series, but when you look at the timeline of releases so far, and how long it took him to write each one, the long delay is hardly out of character for him, so maybe we should all just back off. Whoops!

So I start reading. Before I’m fifty pages in, I’m already thinking “Yep, I’m very glad I watched the show first!”. I would have had a devil of a time following what was going on if I hadn’t. There are several points of view, and Martin switches back and forth between them super-fast, telling three different storylines simultaneously.


First, there’s Ned Stark, a Lord from the North, who is called to King’s Landing to serve as Hand of the King (the King being an old war buddy of his, if you went through what they did you’d understand). When he arrives in the southern city, he discovers that the King’s children are actually the product of an incestuous FWB thing going on between the Queen and her twin brother. (And don’t bother saying “ewww”, being disgusted by Queen Cersei and Jamie Lannister’s all-family fuck-fest is so 2011.) When Ned threatens to reveal the Queen’s secret, the King is mysteriously “killed by a boar” while hunting (read: low-key murdered), and Ned is executed as a traitor. His family arcs up, and declares war on the whole Kingdom. (Yes, this is the Land of the Great Overreaction.)

Meanwhile, further north, Ned’s bastard son has joined the league of the Night’s Watch, who protect The Wall (a giant block of ice that separates the Kingdom from the Northern wilderness). They’re there to keep out The Others, a kind of Zombie army (i.e., the “bad guys”). The Wall serves as a default penal colony, and all the undesirables from the Kingdom end up there, so it’s a pretty motley crew and not at all what the bastard expected.

And then there’s everything that’s going on Across The Narrow Sea. The Targaryens are the former royal family, ousted by now-King Robert Baratheon (the one that got boar-ed). Generations of in-breeding sent them a bit bonkers, but the two remaining kids – Viserys and Daenerys – seem to be holding up alright. Well, except that Viserys sells Daenerys in marriage, hoping that her new Dothraki (read: savage) husband will give him an army that he plans to use to re-take his throne. He’s a right prick, actually, in case you hadn’t guessed… and an impatient one, as it turns out. Daenerys’s savage husband brutally murders Viserys (is it wrong to have a “favourite murder”? I hope not, because this is mine!) because he keeps nagging him about the whole army thing. Daenerys thinks she’s home and hosed, but she has a bit of a rough trot; her husband dies, her kid dies, and she goes full bad-ass bitch and takes over the whole situation. She marshals her remaining followers and figures out how to hatch three live dragons – the throne is gon’ be hers, make no mistake. The story ends there (gasp!), with the lingering threat of a burgeoning dragon queen.


So, yes, A Game of Thrones has a really intricate and complex plot, but that’s not exactly uncommon for fantasy. The unique circumstances for this book, though, is that you’d pretty much have to be dead not to have at least some idea of what it’s all about, given the popularity of the TV show. I liked picking up on some of the interesting details that I missed in the show (like the symbolism of the stag killing the direwolf in the opening scenes). It was just enough to hold it all together for me, but – like I said – I’m damn glad I watched the show first, and I would have really struggled reading A Game of Thrones if I hadn’t.

The main recurring themes are (1) choosing between stuff (usually the people you love and some kind of honour/duty), and (2) the fuzzy distinction between good and evil. Martin himself has said:

“Having multiple viewpoints is crucial to the grayness of the characters. You have to be able to see the struggle from both sides, because real human beings in a war have all these processes of self-justification, telling ourselves why what we’re doing is the right thing.”

A Game of Thrones hardly revolutionises the fantasy genre in that regard, so I can see why die-hard fantasy fans roll their eyes at it a bit. I’m not really here for the fantasy, though, so it didn’t bother me enough to write it off entirely. And on the other side of it, you’ve got the ones that turn their noses up at anything with a popular adaptation, so you’d think that would really limit its market… but Martin seems to be doing okay regardless, so my heart doesn’t exactly break for him. In the end, I’m here for the politics, the underhanded wheeling and dealing, and he absolutely nails that aspect. If that’s not your style, there’s also a lot of internal conflict and character development to keep you entertained.

I did notice a few typos in this edition, especially towards the end – I guess the editor just got tired? It’s hard to blame him, this bad boy is several hundred pages long…

In the end, it was quite comforting to read a storyline with which I was already familiar (that doesn’t happen often with my reading list, given that every book is one I’ve never read before and I rarely take the time to watch TV or film adaptations). I really enjoyed A Game of Thrones… but I’m not sure I’d recommend it to someone who hasn’t already seen (and loved) the show. If you didn’t enjoy the show, you definitely shouldn’t bother with the book – what you see is what you get.

My favourite Amazon reviews of A Game of Thrones:

How To Read More Classic Books

More Of The Best Opening Lines In Literature