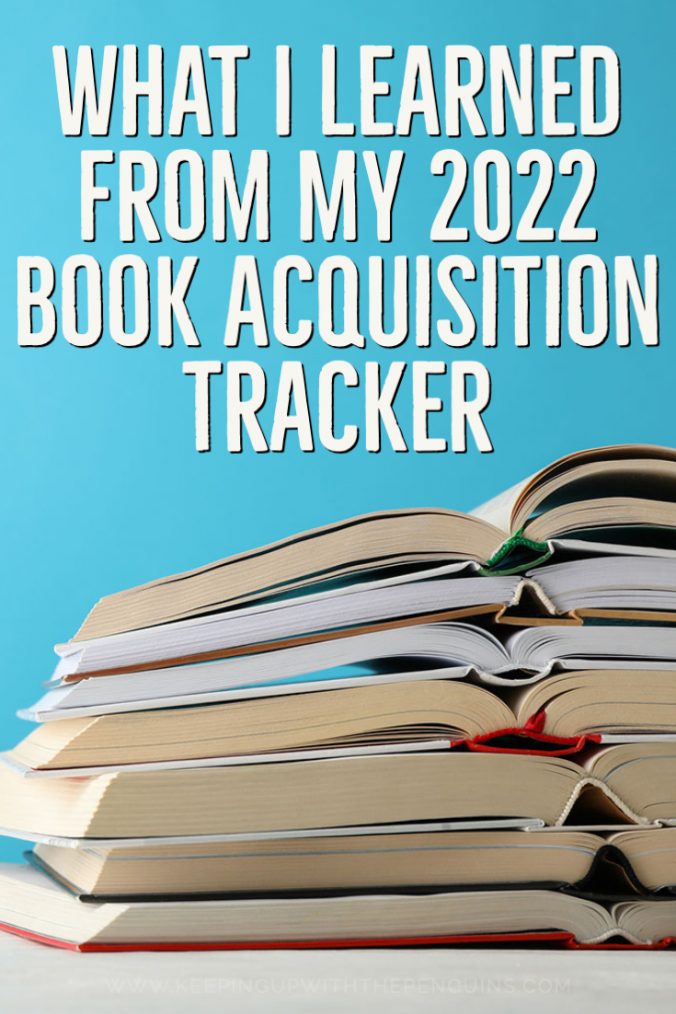 What I Learned From My 2022 Book Acquisition Tracker

I don’t know what got into me, but I thought it would be a fun little experiment to track how many books I acquired over the course of this year. My books come from many sources – I buy them (of course), but I’m also gifted many by wonderful friends, and sent copies for review by publishers and authors (I am very, very lucky). Now that the end of the year has (almost) rolled around, it’s time to take a look at the results. Obviously, anything Santa brings me won’t be included – but it’s still a pretty good overview of my book acquisition habits.

How many books I acquired

Alright, let’s get the obvious out of the way. How many books did I acquire this year?

That’s roughly twelve a month, or just under three a week – not bad at all! Not the crisis situation I was imagining. Especially when you consider that I’ve already read well over 100 books this year, so it’s practically almost parity.

How many books I bought

I wasn’t foolish enough to track how much money I spent on books (sometimes, ignorance really is bliss), but I did keep track of where the books came from. Of the 142 books I acquired, I only actually spent money on 57 of them! That’s barely one a week – not too shabby!

The remaining 85 books were gifts from friends, review copies sent by authors and publishers, and – on the rare, lucky occasion – opportunistic finds on hard rubbish days.

Books on my wishlist vs impulse purchases

I’m proud to report that 33 of the books I bought this year were actually on my wishlist! That means that more than half the time, I wasn’t just being an impulsive book buyer – I was buying with purpose.

Month(s) with most books acquired

I would have assumed that I would have acquired the most books in April (the month of my birthday), but I was wrong!

I acquired the most books in February and October, 18 each. There weren’t even big book fairs those months or anything, so I’m not sure how to explain it.

Another surprise: I acquired the fewest books in November and December, with 6 each. I suppose that’s explained by spending the end of November isolating at home and comatose with COVID, and the fact that December isn’t technically over yet. Or maybe I just saw the number on my tracker creeping up towards the end of the year, and subconsciously decided to rein it in…

Many of my favourite acquisitions were those super-lucky wishlist finds. I found The Librarian (Sally Vickers), Here In The After (Marion Firth), The Know-It-All (A.J. Jacobs), and The Lost Apothecary (Sarah Penner) – all on my wishlist – at op shops and book fairs, for spare change.

I also had a particularly impressive haul from one hard rubbish day, where a house across the street had put out a box of amazing books – that’s where I picked up Something Wicked This Way Comes (Ray Bradbury) and The Lottery (Shirley Jackson), among others!

Of all the books that were sent to me by authors, DeadStar was definitely a winner. Nick Griffiths made such a charming pitch, and it was a great read! Special shout-out also to Bronwyn Birdsall, who arranged for her publisher to send me a copy of her brilliant debut, Time And Tide In Sarajevo.

And some of my best reads of the year – like 56 Days (Catherine Ryan Howard), Sadvertising (Ennis Ćehić), Weather Girl (Rachel Lynn Solomon), and Demon Copperhead (Barbara Kingsolver) – were all sent to me by their publishers for review. I feel so privileged and honoured to get to read these books and share them with you all.

And that’s a wrap! How many books did you pick up this year? Let me know in the comments!

Edited to add: After I put this post together, I remembered where I got this idea! It was from Hannah, at Read The Best Books First, who kept a similar tracker for her 2021 book acquisitions. Cheers, Hannah! This was fun!