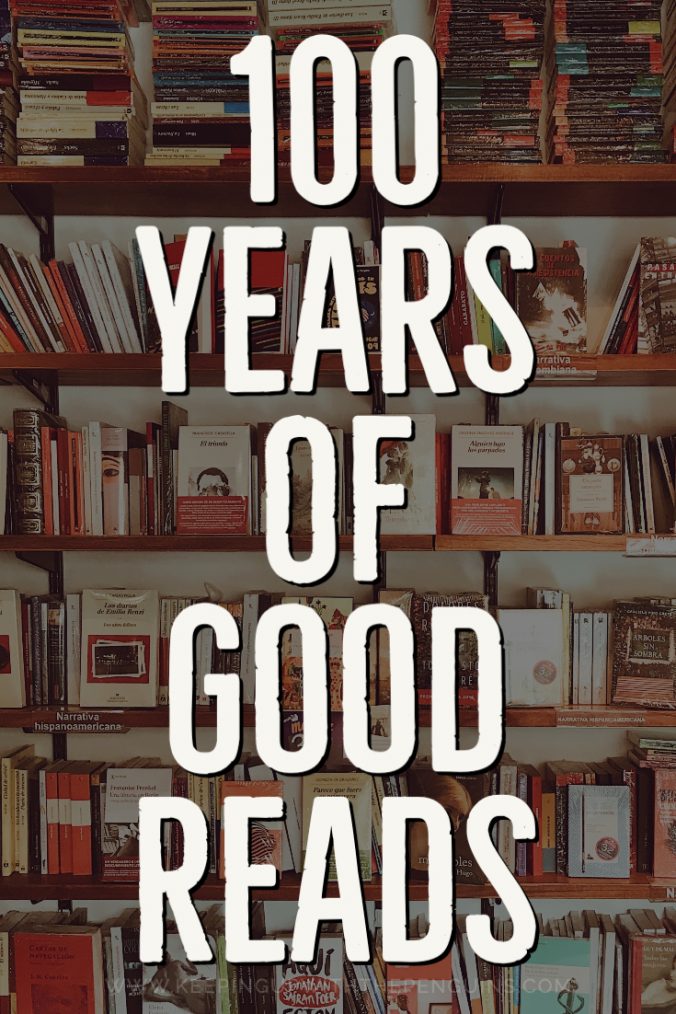 I came across something fun on Goodreads the other day. They’ve put together a list of “the most popular books published over the past 100 years, as determined by Goodreads members’ digital shelves”. What a great use of the data they’ve collected from us obsessive book loggers!

It’s actually pretty fascinating: There are plenty of old-school masterpieces, of course, and a good supply of those books most likely to be found in required school curricula. But you’ll also find gonzo journalism, children’s classics, international literature, Arabic poetry, existentialist dread, and even graphic novels.

Just for fun, I thought I’d go through the list and add a little commentary for you. (Okay, and I also wanted to tally up how many of them I’d already read – sue me!)

I don’t want to be that girl, but I promise you: Ulysses is not the crisis situation you’re imagining! Read my full review of Ulysses here.

1923: The Prophet by Khalil Gibran

A soldier gets his dick blown off, and remains such a misogynist that he never figures out how to go down on the lady he loves. The Sun Also Rises? More like The Lady Also Deserves To Finish. Read my full review of The Sun Also Rises here.

1927: To The Lighthouse by Virginia Woolf

1928: The Well Of Loneliness by Radclyffe Hall

1930: As I Lay Dying by William Faulkner

A truly pleasant surprise! As I Lay Dying is short, weird, and an excellent example of why men can write from a woman’s perspective (occasionally). Read my full review of As I Lay Dying here.

1933: In Praise Of Shadows by Jun’ichiro Tanizaki

1934: Murder On The Orient Express by Agatha Christie

1937: Their Eyes Were Watching God by Zora Neale Hurston

Did you know that Rebecca has never been out of print? Never, not once, in the nearly-hundred years it’s been a good read? It’s gothic, it’s spooky, it’s fun, and it’s more than deserving. Read my full review of Rebecca here.

1939: The Grapes Of Wrath by John Steinbeck

1941: The Library Of Babel by Jorge Luis Borges

1942: The Stranger by Albert Camus

The Little Prince works precisely because doesn’t get bogged down in making things “realistic” for the grown-ups. “Grown-ups never understand anything by themselves,” de Saint-Exupéry writes on page 6, “and it is exhausting for children always and forever to be giving explanations.” Bring tissues. Read my full review of The Little Prince here.

1945: The Glass Menagerie by Tennessee Williams

1946: The Member Of The Wedding by Carson McCullers

1948: I Capture The Castle by Dodie Smith

Did you know that books don’t actually burn at 451 degrees Fahrenheit? Ray Bradbury asked an expert for help naming his novel, but they misunderstood the question. Paper auto-ignites at that temperature, but burns much, much lower. That fun fact is honestly more interesting to me than Fahrenheit 451 was. Read my full review of Fahrenheit 451 here.

1959: The Haunting Of Hill House by Shirley Jackson

1960: To Kill A Mockingbird by Harper Lee

Catch-22 is funny… for the first hundred pages or so. Beyond that, you’re just reading the same joke over and over again. It’s good to know where the idiom came from, though! Read my full review of Catch-22 here.

It’s infuriating how good The Bell Jar is. Like, seriously, I wanted to throw it down on the floor and just give up. So good. And the Faber editions are so pretty! Read my full review of The Bell Jar here.

1964: Charlie And The Chocolate Factory by Roald Dahl

1966: Rosencrantz And Guildenstern Are Dead by Tom Stoppard

1967: One Hundred Years Of Solitude by Gabriel García Márquez

1968: Slouching Towards Bethlehem by Joan Didion

1969: I Know Why The Caged Bird Sings by Maya Angelou

1970: The Bluest Eye by Toni Morrison

Morrison has said that she wrote The Bluest Eye because she was “interested in talking about black girlhood”. It seems sadly inevitable that a book on that subject would end up a foundational text about the impact of Euro-centric beauty standards and internalised loathing. Read my full review of The Bluest Eye here.

1971: Fear And Loathing In Las Vegas by Hunter S. Thompson

1973: The Princess Bride by William Goldman

I’ve got this one on a to-read shelf, that I might get to… some day… probably…

1977: Song Of Solomon by Toni Morrison

1978: The Westing Game by Ellen Raskin

1982: The Color Purple by Alice Walker

The Color Purple is still – to this day – being challenged, banned, and removed from high school reading lists. Common reasons for scrapping it from reading lists include the explicit sexual content, language, violence, and lesbianism (the horror! eye roll). Read my full review of The Color Purple here.

1983: The Queen’s Gambit by Walter Tevis

1984: The House On Mango Street by Sandra Cisneros

1985: The Handmaid’s Tale by Margaret Atwood

1988: The Alchemist by Paulo Coelho

The Alchemist is a beautiful fable, a wonderful read… for hippies. Read my full review of The Alchemist here.

1989: The Pillars Of The Earth by Ken Follett

1992: The Secret History by Donna Tartt

1993: The Virgin Suicides by Jeffrey Eugenides

1994: The Wind Up Bird Chronicles by Haruki Murakami

1995: The Golden Compass by Philip Pullman

A Game Of Thrones might never have made it onto a list like this, if not for the HBO adaptation that had the whole world glued to their screens for eight seasons. But here we are! Read my full review of A Game Of Thrones here.

1998: The Poisonwood Bible by Barbara Kingsolver

1999: Girl With A Pearl Earring by Tracy Chevalier

2001: The Shadow Of The Wind by Carlos Ruiz Zafón

2003: The Namesake by Jhumpa Lahiri

I reckon this one is destined to become a classic. It’s clever, and it’s creepy as heck. Well deserving of its place on this Goodreads list! Read my full review of Never Let Me Go here.

Look, if you’re in the mid- to upper-end of the Young Adult bracket and you’re just starting to understand the significance of WWII, The Book Thief is a brilliant, life-changing read. For the rest of us… well, it’s a good reminder that literacy is important. Read my full review of The Book Thief here.

2010: The Immortal Life Of Henrietta Lacks by Rebecca Skloot

To call The Immortal Life Of Henrietta Lacks a “biography” is reductive. It’s so much more than the dates and facts of a life. It’s a study of bioethics, a masterclass in accessible science writing, and a testament to the human consequences of scientific discovery. And it’s compelling as heck! Read my full review of The Immortal Life Of Henrietta Lacks here.

2011: The Song Of Achilles by Madeline Miller

If you haven’t read Gone Girl yet, monks could use the rock you’ve been living under as an off-the-grid retreat. You need to hop to it, if for no other reason than it’s miraculous it hasn’t been spoiled for you yet. Read my full review of Gone Girl here.

2013: The Goldfinch by Donna Tartt

2014: Everything I Never Told You by Celeste Ng

2015: Between The World And Me by Ta-Nehisi Coates

When it comes to writing memoirs, you’ve either got to have talent for storytelling or a life so fascinating that talent (or lack thereof) doesn’t matter. Luckily, Tara Westover has both. Even in the hands of a real bore, Educated would be a fascinating read. Read my full review of Educated here.

Red, White & Royal Blue, unbelievably, lives up to the hype. Of course, it’s targeted at younger readers, but I can vouch for the fact that it resonates for young-at-heart readers, too. I’d especially recommend it for fans of The West Wing and anyone who needs a bit of starry-eyed optimism. Read my full review of Red, White & Royal Blue here.

2020: The Vanishing Half by Brit Bennett

Through this multi-generational family saga, Brit Bennett plays out the domino effect of reductive labels. The Vanishing Half is a must-read for your book club; there’s a lot to unpack here. Read my full review of The Vanishing Half here.

Alright, I’ve read 33 of these so far, and reviewed most of them, too! Not bad! How about you? Drop your total in the comments! And thank you Goodreads for putting together this list – nice to see you using your powers for good.